Eagles Flyers Phillies Sixers About Us Write For Us
Brett Brown will continue to go with McConnell, not Fultz
Report: Possibility exists Phillies will option Williams in favor of Quinn

An ode to Ilsinho, a player that can make dysfunctional function.

The Philadelphia Union attack is in a weird place this season. They're creating chances at a good rate but they aren't necessarily good chances. But when a good chance is created, it doesn't end up in the back of the net.

Fabian Herbers brought absolutely nothing offensively while deputizing for Fafa Picault during his suspension and Picault is also too conventional of a winger to offer much when he comes inside. Lucky for the Union, there is one man who is fit to operate in half channels while taking on a few defenders doing elasticos when he wants.

That man is a Brazilian named Ilsinho.

A man who has been a polarizing member of the Philadelphia Union during his tenure with the club but a man who has also been surprisingly effective since getting regular starting minutes in the second half of last year.

I hate the term that *insert athletes name here* is in the shape of their life but Ilsinho is in the best shape that I've seen since his Shakhtar Donetsk days and it translated as he made his first start since last season in a rivalry game versus DC United that the Union desperately needed a win in. After DC scored in the seventh minute, the air was sucked out of Talen Energy Stadium and the Union needed a bit of a break to get it back.

In the 37th minute, they got just that via Ilsinho. After trying progressive passes all afternoon, one of his “passes” found the foot of a DC United defender who helped ensure that it would find the back of the net. Add that to his interplay with Borek Dockal and it was the perfect medicine for the first multi-goal performance for the Union since the season opener.

What I found interesting though is that in deeper positions, Ilsinho stuck pretty close to the flanks of the field but as soon as the team got into the attacking third he would swap with Dockal so that both players could play their favored roles. While there were some miscommunications it was an experiment that was a success and it’s a lineup that should continue to strive. 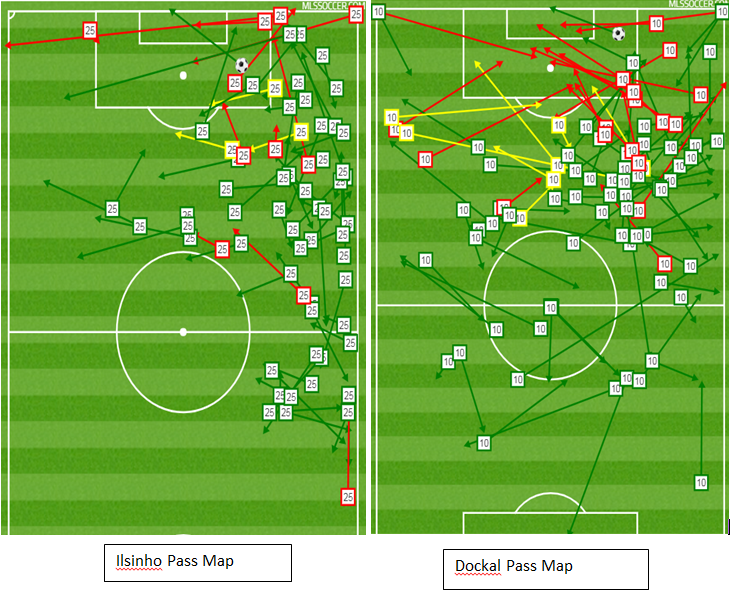 Looking at these pass maps, Dockal is the closest thing that the Union have had to a “volume number 10” since Tranquillo Barnetta but he needs someone to take off the pressure in the final third and Ilsinho along with runs into the box from Alejandro Bedoya.

If David Accam could even show flashes of his Chicago days, this front three could be special but for now, Accam is looking like a different player than this time last year. It may be time for Jim Curtin to sit Accam in favor of Fafa Picault even if it's just to light a fire under Accam. But with ⅔’s of the front three figured out, all the Union need is average finishing and they should score quite a few goals on the season.

It's possibly the most talented attack that the Philadelphia Union have ever had but the glue to bring them together comes with the marauding runs of the one and only Ilsinho.