Eagles Flyers Phillies Sixers About Us Write For Us
Late Night Machado Rumors: Yankees Out, Phillies "Most Likely"
Heyman: Dodgers Pull Ahead as 'Leading Contender' for Machado

Flyers Better Off with Giroux at Wing 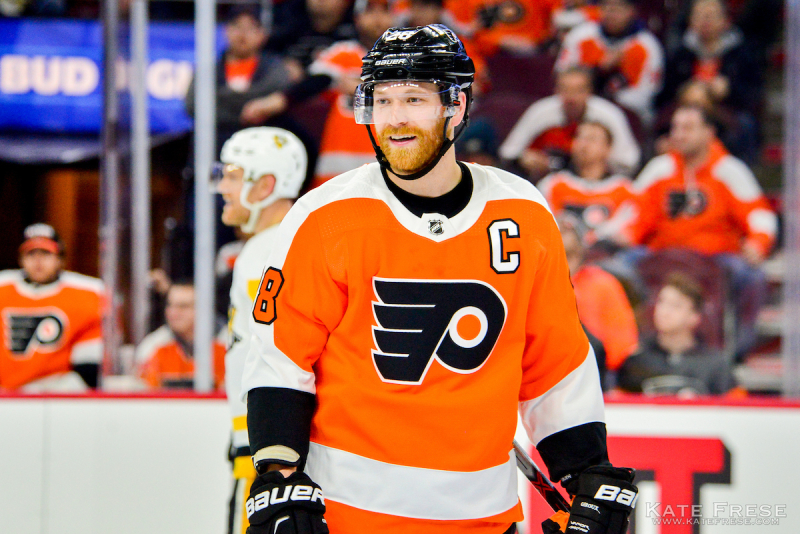 Flyers captain Claude Giroux had a career year in the 2017-18 season, putting up over 102 points, including a career-high 34 goals in a new role on the wing. Dave Hakstol made the decision at the beginning of the season to move Giroux to the wing, putting Sean Couturier at center on the first line.

This was a bold move by Hasktol, but it worked out with both players having career seasons and getting league-wide recognition. Giroux was an All-Star and viewed as a snub for the Hart Trophy. Couturier finished second in Selke Trophy voting.

The smart decision in the 2018-19 season is to keep the two players together with Giroux still manning the wing, where he had so much success.

The acquisition of James van Riemsdyk can help boost the second line, a line that played great together late in the 2017-18 season. Nolan Patrick’s game came around even more late in the season and Jake Voracek was another player putting up career numbers, among the league leaders in assists. A healthy offseason for Patrick can go far in his development and his promise for the 2018-19 season and continuous play with Voracek and an added weapon in van Riemsdyk will go a long way.

Giroux staying on the wing also helps the Flyers depth wise as well. While it is still a question as to who will take on the third center spot, there are certainly a number of players who can take on that role. Scott Laughton is one option, and last season he stepped up at times to show flashes of success in a third-line role. There could even be a possibility of Jordan Weal taking the third line center spot, a player Ron Hextall singled out as an option for center.

Training camp and the preseason will show what players could take over the third-line center spot. Outside the center spot, the wingers on the third line could easily be Wayne Simmonds and Jordan Weal. Simmonds played most of last season through injuries, so starting the year off healthy would be big for him, and Weal would be looking for a bounce-back season after producing just 21 points in 69 games.

Oskar Lindblom or Michael Raffl are also options for the wing in the bottom six. If the Flyers can help find a solid center whether it is an already-established NHL player like Laughton or a top prospect ready to emerge like Morgan Frost, the Flyers third line is set up to see improvement next season.

The fourth line can also be improved from last season by keeping Giroux at wing. Jori Lehtera is an option for center or wing on the fourth line and the Flyers have a number of forwards who can also fit on that line depending on the rest of the lineup. Raffl and Laughton are two players who could fit into that role as well, and the team recently re-signed Taylor Leier, who also fits the mold of a fourth-line player and brought good chemistry to that line early last season.

If the Flyers go with a similar look next season, the fourth line should be a faster group that can help with forechecking and defense as well.

Where Giroux plays next season, whether at center or on the wing, will dictate how the lineup looks. More than that, Giroux had the most successful offensive season of his career on the wing, and keeping him in that role should help him continue to have a big offensive impact again. Giroux may not put up 100 points again, but keeping Giroux on the wing should help the Flyers captain continue to be an offensive driver.