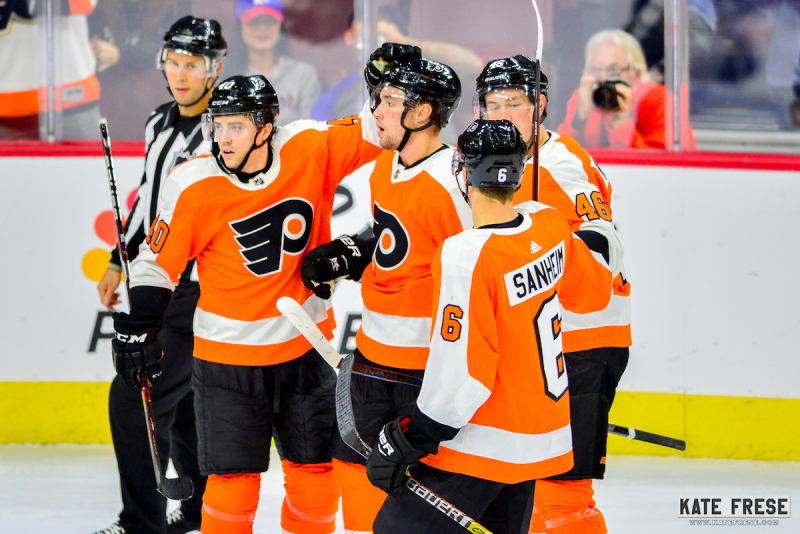 The Flyers had to get the roster to 23 with one final cut on Monday. In a bit of a surprise, two cuts were made, bringing the roster to 22 for now, though that could change in just hours.

As always, there are thoughts from around the fan base on who made it, who was cut and who should have stuck around.

Regardless, the Flyers have their final 22. Here’s some analysis on the roster and the final decisions that were made.

The top six was obviously never in question. On the third line, Wayne Simmonds was also locked in before camp even began.

As for the final five forwards, plus a pair of reserves, there were some spots up for grabs.

Oskar Lindblom started to look like a lock after rookie camp. He was clearly above that level.

Mikhail Vorobyev had an excellent camp from start to finish. It was impressive at the start and then settled into consistency. He continued to produce points while displaying the two-way ability needed in the NHL. He earned every bit of this spot in the third-line center battle.

The Flyers weren’t going to cut Jordan Weal, Michael Raffl or Scott Laughton, but all three had to earn the fourth-line spots. Laughton had a strong camp in my eyes, very energetic and active in drills and games. He looks hungry to take another step this season.

Of the players cut, there wasn’t really a surprise leading up to the final move. Carsen Twarynski was a pleasant surprise, but wasn’t going to make the team without a pro season on his resume. Tyrell Goulbourne and Nicolas Aube-Kubel also had solid preseason campaigns, but it wasn’t going to be nearly enough to make it.

You have to feel for Corban Knight. I felt he was on his way to locking up a spot when he suffered an upper-body injury in Thursday’s game that will keep him out for three weeks. The road to the NHL off an injury is even tougher.

With Knight out of the picture, it came down to Taylor Leier, Jori Lehtera and Dale Weise for the final two spots. In an interesting move, the Flyers placed both Leier and Weise on waivers.

There are two schools of thought to this. The Flyers could have a trade or waiver claim in the works and fill the final spot that way or they could be preparing for when Knight returns and a player needs to be removed from the active roster anyway.

Placing Weise on waivers makes total sense. He didn’t play in the preseason finale, indicating he didn’t factor into the lineup, and he’ll almost definitely clear waivers with his contract. It’s a deal that really hasn’t panned out in any way.

Leier is more interesting though. He seems like a player another team would value through the waiver wire. The Flyers already lost Danick Martel through waivers earlier in camp and could find themselves without Leier too if a team is interested.

There wasn’t much suspense to this once Andrew MacDonald took the ice in a preseason game and Phil Myers was sent down. Mark Friedman wasn’t going to make the team out of camp, but he took a lot of big strides to show he can be a call-up option as well.

As for the rest of the defense, there’s a great top pairing in Ivan Provorov and Shayne Gostisbehere. Travis Sanheim looks more comfortable on the defensive end. Robert Hagg got a lot of playing time in the preseason and started to throw his weight around as the preseason continued.

The final three of MacDonald, Radko Gudas and Christian Folin leave a lot to be desired. Gudas didn’t look terrible with Sanheim, but things get dicey on other pairings. Folin played a lot and seems fit for a seventh defenseman role. MacDonald looked like he needed more recovery time, but will probably still be on the ice on Thursday to start the season.

Easily the position that carried the most intrigue and suspense during training camp.

There was no doubt that if Brian Elliott was healthy and good to go, he was starting. Injuries to Alex Lyon and Michal Neuvirth force them to start the season on injured reserve. That left a roster battle between 20-year-old phenom Carter Hart and Anthony Stolarz.

In the end, Hart went to the Phantoms as expected. There are two reasons this was the right move.

First, Neuvirth has already started skating again, which means he is probably close enough to returning that Stolarz’s spot on the roster is only temporary. There is no reason to keep a 20-year-old on the bench as the backup for five games or less just to send him down. If he was going to stay, he was going to play.

Hart didn’t really have the standout game he needed to have during the preseason. He had a great third period against the Rangers at the halfway point of the preseason, but wasn’t really tested in his last two appearances.

In his final game of the preseason on Thursday, Hart stopped 14 of 17 shots. Elliott started on Saturday and was sharp making 26 saves on 27 shots. If the roles were reversed, it may have been difficult to cut the kid. But with Elliott finishing on a high note and Neuvirth back on the ice, there was really no question where Hart was going to end up. At the very least, he can get work as the No. 1 goalie in the AHL and is much more of a likely call-up now than he was when the preseason started.

Stolarz is a viable backup, can probably handle a start on the back end of a back-to-back against the Senators if Neuvirth is still out on Oct. 10, and will probably be returned to the Phantoms when Neuvirth returns.