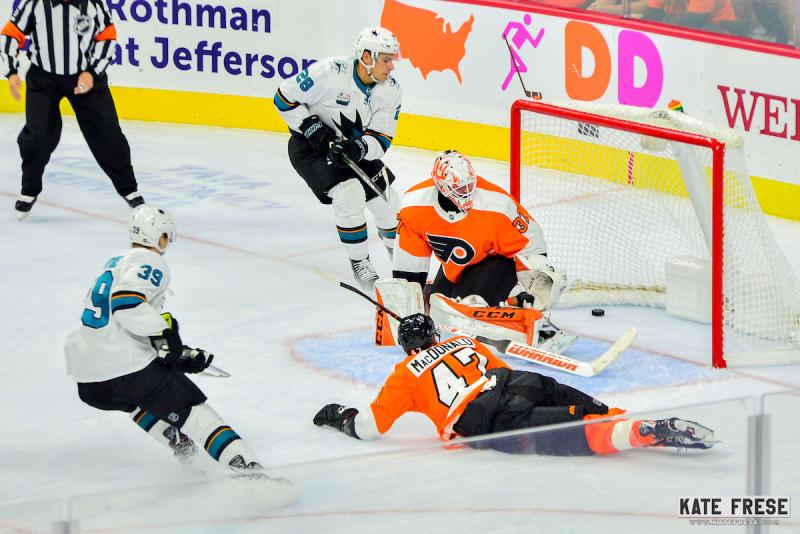 The tone of Shayne Gostisbehere’s voice seemed to say it all. His answers, while clearly frustrated and dejected, were honest and spoke volumes.

“It could’ve been eight nothing after the first, I mean it’s a little ridiculous,” Gostisbehere said. “Some of us really have to look in the mirror on this team, and we just gotta respond tomorrow. To leave a guy out to dry like that, it’s really not fair.”

Gostisbehere was arguably the best of the Flyers six defensemen in Tuesday’s 8-2 rout by the San Jose Sharks, granted the bar wasn’t set very high. He continued in his comments talking about the timing off the loss.

“I’m not making excuses but I’d rather it happen now than later,” Gostisbehere said. “No one in this room is by any means happy right now, it was a stinker, it was bad. To leave a guy out to dry like that is absurd. You see a goalie like that, you want to battle for him. I mean it’s just ridiculous.”

There are really two ways that this can go. Claude Giroux said that while it’s your home opener and losing like that is frustrating, it’s just one game and there’s no need to panic. Maybe not yet, but there could be soon enough.

It’s why I like Gostisbehere’s answer more. It’s three games into the season and the Flyers are dealt with a defeat of this nature, a total clunker this early in the season. It’s embarrassing across the league and continues to make the Flyers the laughing stock of the city’s sports team. And even this early in the season, the response to a loss like this can determine where this season is heading before it even picks up steam.

If Tuesday’s loss showed anything, it’s that the Flyers don’t appear to have changed all that much from one season to the next. It’s another chapter in a never-ending novel where players struggle to defend, turn the puck over consistently and pass up the shooting opportunity to thwart a potential scoring chance. That’s not just players playing poorly. That’s a coaching issue. That’s a system issue.

But the insistence is that the team is better, that they got better on paper, that the kids are going to keep improving with more playing time. It becomes a greater challenge to defend such claims with games like this.

The Flyers are in Ottawa on Wednesday night and in the back-end of a back-to-back against a team with little expectations for this season, it sure sets up to be a trap game. Now, this is a spot where the Flyers can’t afford a trap. They need to rebound.

But if the Flyers come out slow and sloppy, frustrated and overlook the opponent, it will be another case of the same ‘ol Flyers. Simply put, the 8-2 loss on Tuesday has to be a motivator, now and moving forward.

The Flyers have done this in both years they have made the playoffs under Dave Hakstol, falling behind early and having to make some gigantic rally during the second half of the season to establish a playoff spot. This is the result of poor play and bad results in October and November, not struggling down the stretch.

The Flyers are now 1-2-0 going into Wednesday’s game, fresh off the embarrassing defeat. They can either turn the tide quickly and start playing like the team that took control in the second period in Vegas or the team that showed up on Tuesday night. But the way they play for the rest of the month, starting with Wednesday, will set the tone for the rest of the season. They can take the frustration from Tuesday, turn it to motivation and be the successful team that people believe they can be, or it could be the starting point to a long and miserable season.

The choice is theirs.