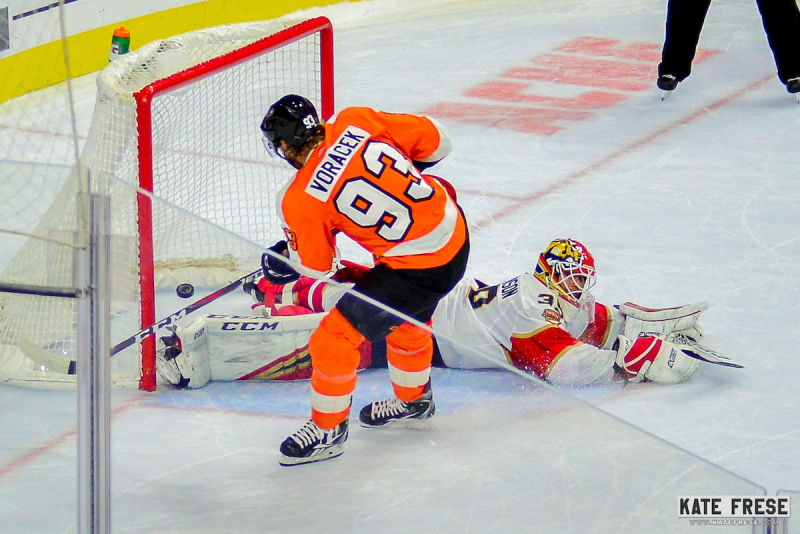 After a rather dismal first period, the Flyers came storming back in the second and opened up a 5-2 lead with 2:57 left in the period. It seemed like they were well on their way to their first win on home ice.

But that's the thing about the Flyers. Never assume.

The Panthers scored a power play goal in the second and twice in the third period to tie the game at five and force overtime and eventually a shootout.

The Flyers got the better of the Panthers in the end via the shootout in a wild 6-5 win on Tuesday night at Wells Fargo Center.

The Flyers struggled at the start with sloppy play and a lot of turnovers trying to exit the zone. Florida piled on the shots early, taking a 9-3 advantage.

Both teams had power play chances in the first. The Flyers continued to display an aggressive penalty kill, easily completing the kill on an interference penalty by Travis Konecny. The Flyers spent nearly the entire power play in the offensive zone with the top unit, unable to find a way to score.

Seconds after the Flyers power play ended, the Panthers finally struck for the game's first goal. Frank Vatrano gained control as Florida got back to even strength, escaped a battle with Scott Laughton and threw a shot on goal from a sharp angle that beat Brian Elliott low to give Florida the lead at 17:58.

The Flyers emerged a completely different team in the second period and applied heavy pressure early. Unlike Saturday's game, they were able to solve Panthers goalie Michael Hutchinson on several occasions in the middle period.

First, some nice puck movement by the Flyers set up the first goal, as Travis Sanheim put a low slap-pass into the wheelhouse for Wayne Simmonds for a deflection from the slot to tie the game just 1:18 into the period.

The Flyers took the lead at 5:54 as Robert Hagg's point shot was deflected in by Jordan Weal for his first goal of the season.

Following a successful penalty kill for the Flyers, a turnover by Aaron Ekblad set up Claude Giroux in the slot and he didn't miss with his chance to make it 3-1.

Florida cut the lead to one again on a strange play. Jared McCann dumped the puck into the zone from outside the Flyers blue line. The dump-in hit the endboards and bounced back off the outside of the net. Elliott did not corral the puck or steer it aside and Vatrano came barreling in to jump on the loose puck and score his second of the game, crashing into Elliott after finishing on the goal.

The Flyers answered back with a pretty play. Christian Folin started the play with an aerial pass from blue line to blue line that Scott Laughton was able to control. Laughton drew the defender and centered for Simmonds, who put a nice move on Hutchinson before going to the backhand to score his fifth goal of the season and second of the game.

A great individual effort by Shayne Gostisbehere just over 90 seconds later added another goal to the Flyers total, as he was able to stickhandle through the Panthers defense and get a pass across to Giroux, who buried it from the side of the net for his second goal of the game.

A large scrum almost immediately followed the goal once play resumed, and the Flyers ended up shorthanded as a result. Both Alex Petrovic and Simmonds got two-minute roughing penalties and 10-minute misconduct penalties. Hagg also took a roughing minor.

It took the Panthers just eight seconds to strike on the power play as Aleksander Barkov was able to tip a pass from Mike Hoffman in to cut the Flyers lead back to two to end the second period.

Shots after two periods were 20-16 Florida.

Early in the third, Florida struck for a goal when Evgenii Dadonov got behind the Flyers defense and used a nice move to beat Elliott and cut the lead to one. That was the end of the night for Elliott, who exiting after allowing four goals on 23 shots. Calvin Pickard entered in relief.

With the Flyers starting to apply pressure again in the offensive zone, they got caught and that allowed Barkov to come roaring back on a breakaway. On the first shot Pickard had to face, Barkov undressed him with a great move to tie the game at five.

The Flyers held the better end of the play from there, but could not score in regulation.

In overtime, the Flyers got their second power play of the game when Hoffman went off for tripping, but couldn't really get set up or generate many chances. The overtime came and went without any scoring and the game went to a shootout.

The Flyers return to the ice on Thursday night on the road to face the Columbus Blue Jackets. Game time is 7 p.m.