Fletcher: ‘I’m Very Fortunate to Walk Into This’ 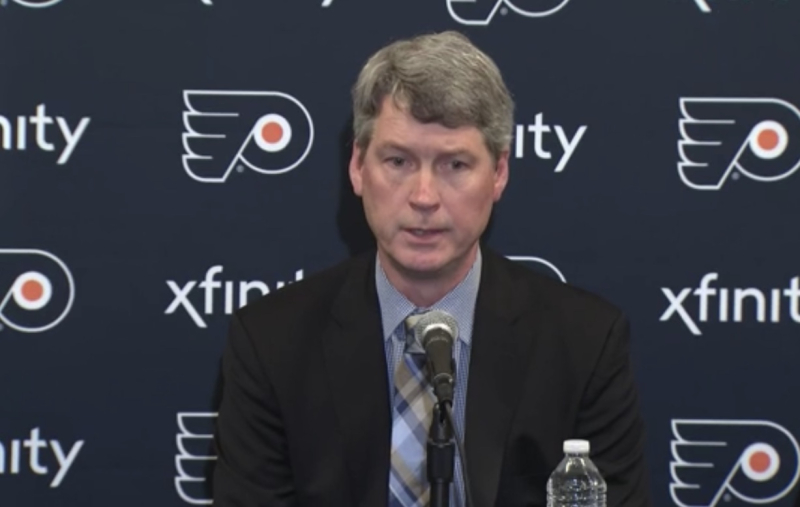 Following practice on Wednesday, new Flyers GM Chuck Fletcher met with the media for his official introduction. It had been around 36 hours since Fletcher had officially been hired as the Flyers GM, less than a week after initial contact was made considering him for the position.

On Monday night, during a conference call with the media, Fletcher was just getting his feet wet, learning of the situation. Two days into his time as GM, he’s started to evaluate and discuss the franchise with other members of the staff around him. In giving full marks to former GM Ron Hextall, who built up a farm system and cap space, Fletcher recognizes the situation he’s now in is rare.

“The cupboard is full, there are a tremendous amount of prospects,” Fletcher said. “This year we have nine draft picks, we have an extra third and an extra seventh. We have cap space and we have good players. There’s everything here to be successful and that’s our goal and that’s what we’re going to do. It’s set up for success. The history. The city. I called it a dream job the other day and it truly is.

This is as deep a prospect group as I’ve seen. There’s a lot of good pieces there and again, there’s good players here. It’s a strong, strong foundation of talent, both players and staff. I’m very fortunate to walk into this.”

Fletcher comes in as the ninth GM -- eighth different -- in franchise history, the first since Russ Farwell to be a complete outsider to the organization upon his hiring. Fletcher is well aware of the franchise’s history, the standard set by the original Flyers of the 1970s and what expectations are within the city.

“It’s an iconic brand, historic franchise,” Fletcher said. “You look at the original six teams in the NHL, obviously there a long time and you put Philadelphia right with them. It’s just a tremendous market, tremendous franchise, great history, Stanley Cup championship history.”

During the press conference, Fletcher sat between Comcast CEO Dave Scott and Flyers team president Paul Holmgren, the two men who led the search for a new GM.

The process happened quickly. Fletcher was contacted last Tuesday, the day after the Flyers fired Ron Hextall. He was in Philadelphia for an interview on Thursday and remained in town for a few days. He was awarded the job on Monday.

The reason for the speedy process was based on where the season currently is. Many teams are still alive in playoff discussion. The Flyers also had limited games over the last 10 days, just last Tuesday and last Saturday. At 25 games played this season, the Flyers still have 57 games remaining on the schedule and time to right the ship. All three acknowledged that.

“We’ve got about seventy percent of our games left, so, my goal going into this was really, try not to miss a beat,” Scott said. “Make sure we get a thorough process but get the right fit for the organization, which I think we’ve done. The goal hasn’t changed, we want to win hockey games, we want to go deep and ultimately, we want to win a cup. It’s the same goal.”

“It’s important to move quickly, just because we do have a lot of hockey left and we want to get back to business,” Holmgren said. “Get back to the business of winning hockey games.”

“Twenty-five game is not even a third of the season. We have a lot of runway left here,” Fletcher said. “We have an opportunity, this group, these coaches, these players, all these staff members, we all have a group to find a way to push and make the playoffs. That has to be our goal. We’re right there, we’re a few points back, but we’re as strong as any of the teams right around us. Hopefully we can find a way to become a very good team as the season moves on.”

Basically, for now, things will remain the same with the roster and coaching staff until Fletcher sees a reason to make a change. Fletcher added that the first place to look for changes is from within.

Fletcher may have been aggressive to a fault in Minnesota, and noted that he learned from mistakes from the past. In a salary cap era, he said, you have to put an emphasis on building through the draft first and foremost.

That said, Fletcher has shown a willingness to do whatever it takes to win. He’s not going to shy away from something if it helps the team get better. It just may not be the first option.

“The first order of business is to look for in-house solutions,” Fletcher said. “I think you have to give people a chance. Players, staff, everybody. If we can get this thing going the right direction, maybe we don’t have to go out and be aggressive. But, if things aren’t working or we’re not getting traction, then I think you have to look at every angle.”

So Fletcher begins his journey as GM of the Flyers, first looking at the current performance of the team -- he noted he gets to watch six games in the next 10 days -- and determine what the next step is, if there even is one needed, as the season moves on. The Flyers will dictate that.

But the Flyers seemed to get the type of guy they wanted running the team. They got someone who is open to making the team better in any way, someone who is going to communicate well within the organization, someone who has a desire to win. That’s ultimately what won Fletcher the job.

“He has a real positive outlook on hockey and life. He’ll bring a lot that way,” Scott said. “Very kind of easy, open management style, leadership style that I really appreciated quickly. Last, I would just say, the passion that Chuck has for the Flyers. He said it, it’s a special brand, it’s an iconic brand and he’s happy to be here, we’re happy to have him.”

So, if the franchise has such a "peachy" future to look forward to, why did the Flyers bag Hextall? Sounds to me like management only needed to ask Ron to make some adjustments in the improvement schedule for the team and to, otherwise, stay the course. Looks to me that, once again, as in the case of Sam Hinke, the guy who has the "balls", originally, to show management the right direction will not be here to reap the rewards of success. Let's hope Fletcher does not turn out to be another Collangelo!