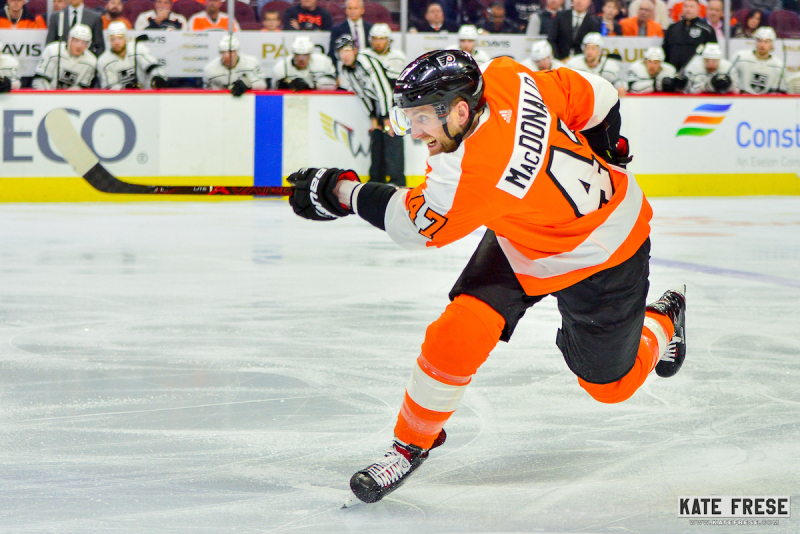 The NHL’s buyout window opened on Saturday and the Flyers certainly had candidates to free up some cap space in advance of the free agency period.

One day after they acquired defenseman Matt Niskanen from the Capitals for Radko Gudas, they officially placed defenseman Andrew MacDonald on waivers for purposes of a buyout. MacDonald is expected to clear waivers and have the contract bought out, making him a free agent.

In the four seasons that followed, MacDonald never played a full season, whether due to injury or healthy scratch. In total, he played in 291 games in his Flyers career, scoring 11 goals and adding 61 assists for 72 points. MacDonald’s time with the Flyers also started with him averaging 22 minutes per game in 2014. By last season, that ice time had dropped to an average of 16 minutes per game.

MacDonald was traded to the Flyers by the New York Islanders, who received forward Matt Mangene, a 2014 third-round pick used to select goalie Ilya Sorokin and a 2015 second-round pick that was later traded to Boston. The Bruins selected defenseman Brandon Carlo with the pick.

There is also the possibility that the Flyers could buy out defenseman David Schlemko, acquired from the Montreal Canadiens last season in a trade involving Dale Weise and Christian Folin. Schlemko could also have his contract buried in the AHL with the potential for a call-up if injuries pile up.