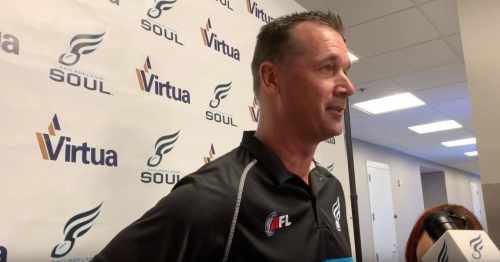 On Thursday, Soul head coach Clint Dolezel was named the 2019 Moss-Marcum Head Coach of the Year, marking the third time in his career that he received the award (2015, 2016, 2019). Dolezel is also just the second three-time winner of the award in AFL history, joining fellow AFL Hall of Famer Perry Moss.

Soul star QB Dan Raudabaugh called Dolezel a "staple in this game" for the past 20 years, and that he has been "one of, if not the biggest contributor to the Soul’s success.”

“Calling the offense, defense, and special teams, there’s no one like him in the game and we’re lucky to have him," Raudabaugh said.

Over seven years with the Soul, Dolezel has an 86-37 record, along with two ArenaBowl championships in back-to-back seasons, 2016 and 2017. This season alone, albeit a myraid of injuries, the former QB coached the Soul to a 7-5 regular season record and their sixth-ever ArenaBowl appearance. In just days, he can win a third championship.

Dolezel and the rest of the 2019 AFL awards recipients will be recognized at the AFL Award Ceremony on Saturday, August 10 — one day before ArenaBowl 32 between the Soul and Albany Empire — at the Times Union Center.