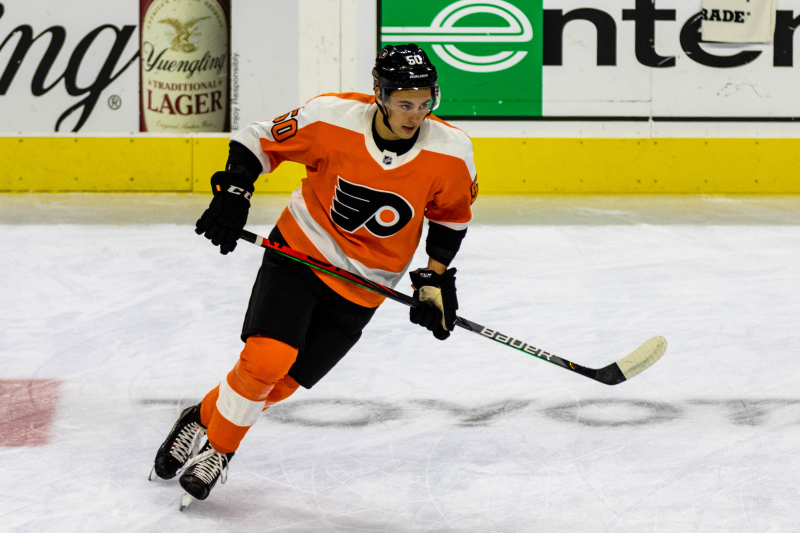 More roster cuts were expected following Monday night’s loss in Boston. The Flyers cancelled practice on Tuesday and GM Chuck Fletcher announced seven additional roster cuts that bring the roster to 27 with just two games remaining in the preseason and two days left until the team heads to Europe.

This leaves 16 forwards, nine defensemen and two goalies on the Flyers roster, a total of 27 players.

The goalies are set at this point. It will be Carter Hart and Brian Elliott to start the season. Hart will play the entirety of Thursday’s preseason game in New York after Elliott played the duration of Monday’s game in Boston.

For the defense, there isn’t much suspense in roster battles outside of the order within the Top 8. Andy Welinski remains on the roster, but is week-to-week with an injury. He would likely have also been sent to the Phantoms in the event that he was healthy.

The Flyers top-five defensemen are pretty easy to identify with Ivan Provorov, Matt Niskanen, Shayne Gostisbehere, Justin Braun and Travis Sanheim. It appears to be a battle between Phil Myers, Robert Hagg and Sam Morin for not only a roster spot, but for a starting spot in the top-six.

The real suspense of final roster decisions comes at the forward position. There are 16 forwards on the roster, but that includes injured forwards Nolan Patrick and Tyler Pitlick. Pitlick returned to practice this week, but in a non-contact jersey, so he is still not close to playing just yet. Patrick remains week-to-week with an upper-body injury. An update is possible on Wednesday, but it’s looking more and more likely that he misses the start of the season.

That leaves 14 forwards left battling for at least 13 roster spots. One forward still in camp is Morgan Frost. Frost had some solid showings this preseason, but a groin injury has him sidelined for five-to-seven days, meaning he won’t play in the final preseason game in the US on Thursday. It certainly hurts his chances of making the final roster.

Chris Stewart also remains in camp on a professional tryout, but he is likely behind some of the other forwards on the roster.

The other three forwards in the running for a spot are all prospects that could be closing in on making their NHL debut. Carsen Twarynski and Connor Bunnaman have emerged as surprises in camp — though Twarynski also had a good camp last year — and Joel Farabee also remains in camp. The roster battles boil down to two injured players and those five roster hopefuls. That’s all that is left in this camp.

There is one more game and a trek through Europe early next week still left for the team to make these decisions, and the team will likely take that down to the wire to ensure they have enough players for a fully-healthy roster from the start.

The Flyers face the Rangers on Thursday night at 7 p.m.