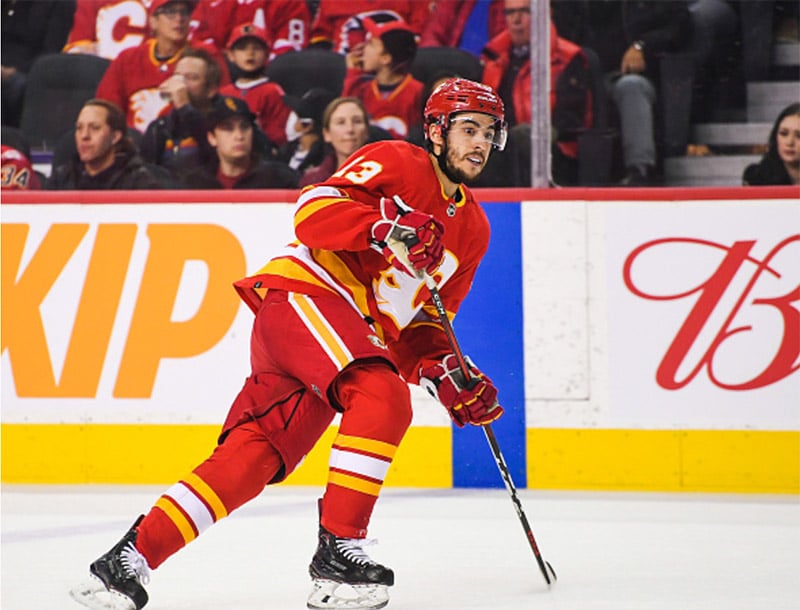 If you thought the days leading up to Tuesday were crazy enough, you didn’t even have wait a full 24 hours to experience more chaos.

The Philadelphia Flyers bought out fan favorite Oskar Lindblom to create $3.3 million in cap space. The Minnesota Wild traded goaltender Cam Talbot to the Ottawa Senators for goaltender Filip Gustavsson. And of course Johnny Gaudreau, and Ondrej Palat are officially hitting the market.

The Flyers need just a little bit more cap space to make room for “Johnny Hockey,” who has long been rumored to join the Orange and Black when his contract originally was expiring with the Calgary Flames. At the time it was a fantasy, considering how incredible Gaudreau has been with the Flames during his eight-year tenure. Now it could be a reality. The 29-year-old New Jersey native will hit the market amongst other top free agent names such as Palat, Andrew Copp, Nazem Kadri, former Flyer Claude Giroux, Nino Niederreiter, John Klingberg, and Darcy Kuemper.

GM Chuck Fletcher has gone on an interesting path ever since the Flyers hired John Tortorella. In an interview with NBC Sports Philadelphia’s Taryn Hatcher, “Torts” said he had sensed Philadelphia’s locker room “splintered”, or not together. Since then, Fletcher has not only brought in a highly-controversial player in Tony DeAngelo, but he got rid of a fan favorite and overall beloved player and person in Lindblom.

Fletcher been rumored to have been working the phones aggressively in shopping winger James van Riemsdyk to get rid of his contract that has just has one year left, but a hefty $7 million cap hit. Lately, teams are being just as aggressive by wanting a first-round pick to take on “JVR’s” full contract. It is certainly a steep price to pay, but is it worth it if he is able to bring in a player like Gaudreau?

No matter what Fletcher does by the time noon hits on Wednesday, he will be up early making countless of phone calls attempting to remove van Riemsdyk’s contract from his team to make room for some top talent. The issue now is if Fletcher will even be able to do that? As much as it’s been reported that teams are being aggressive to acquires a first-round pick from the Flyers – most likely the 2024 1st from the Florida Panthers in the Giroux trade – Fletcher has been holding his ground.

At the rate this has been going for Philly, it wouldn’t be surprising if the New Jersey Devils or the New York Islanders sweep Gaudreau off his feet with an outrageous price he couldn’t refuse. His now former team had offered Gaudreau a whomping eight-year, $76 million contract extension before it had been “reportedly bumped up the numbers in the last couple of days so that Gaudreau would average over $10 million per season,” according to The Athletic.

If he goes in another direction to either his home state in New Jersey, or relatively close to Long Island; below are some other options the Flyers should consider. Before jumping into the following players, each prediction is a contract the player I believe is expected to be given in general, and not just from the Flyers.

Ondrej Palat – The two-time Stanley Cup champion and former seventh-round pick scored 18 goals and 49 points and made his third consecutive trip to the Stanley Cup Final with the Tampa Bay Lightning. He had been previously earning $5.3 million per year. Now, you would probably have to offer Palat closer to $5.8 million to $6.2 million because he’s simply earned it. He plays a hard-nosed game, while providing the opportunity to score big goals. On top of that, he has had some of the biggest success you could have in an NHL career. Prediction: 4 years, $6.2M AAV

Nino Niederreiter – For the right price, I would certainly consider bringing in the former Carolina Hurricanes winger. He notched 24 goals and 44 points in 75 games last season. Another playoff veteran who has seen some success over the years would bring a great welcoming presence to the locker room. On top of that, he’s one of DeAngelo’s former teammates with the Canes who can help keep his emotions in check, when they’re tested. Certainly a player who can protect the puck well, Niederreiter isn’t afraid to shoot the puck. He has an incredible blink and you’ll miss it wrist shot. Prediction: 4 years, $4.1M AAV

Andrew Copp – If the Flyers need a scoring center, look no more than Copp the former Winnipeg Jet and now New York Ranger. Copp, who was acquired at the deadline, went on a rampage of scoring for the Rangers and led the way to a miraculous trip to the Eastern Conference Finals before losing to the Bolts. Copp scored 21 goals and 53 points in 72 games total. He would play an important part considering that the Flyers still need a strong top-nine center. He would provide the grit and offensive scoring that Philadelphia sorely needs. Prediction: 5 years, $6.5M AAV

Dylan Strome – Here’s another player I would consider bringing in for the right price. The former third overall pick should get a lot of looks during the next few days as he officially did not receive a qualifying offer from the Chicago Blackhawks. His 48 points is nothing to ignore, as it would have been right up there with the Flyers highest point scorer in Travis Konecny, who had 52. Now it’s safe to say a big reason why him and some of his other teammates, like fellow free agent Dominik Kubalik, had scored so much is because of players like Patrick Kane and Jonathan Toews. Not to take away anything from Strome or Kubalik, but if  you play on a line with Kane and Toews, there is no reason you shouldn’t have a minimum of 40 points. Prediction: 2 years, $2.5 million AAV

Sonny Milano – Another interesting name that did not receive a qualifying offer from his team in Milano. His name is known throughout the hockey world for finishing off the spectacular flip pass from behind the net from Trevor Zegras; and now the 26 year-old right winger is searching for a home. There are three key factors to every team that has won the Stanley Cup in recent years: speed, depth, and scoring. Milano has all three factors, as he has strong skating abilities to keep up in the play and to hustle back, the important in the lineup he brings to play anywhere in the lineup, and of course his 34-point season isn’t too bad for a bottom six player. Depending on the team,  you could argue that Milano would be able to play in the top-nine. If that’s something he wants to continue to work on, then he’ll need more than a 34-point season. Overall, he is an interesting depth piece that teams like the Flyers need to win. Prediction: 2 years, $2.1M AAV

Thankfully for Fletcher, he will have some options to consider as he tries to make more cap room, whether it’s to make one last serious push for Gaudreau or not.