Have Phillies Fans Given Up Heckling Mets Fans? 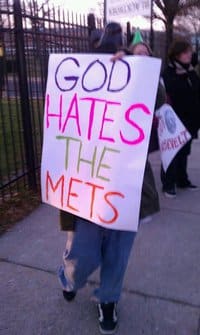 Tuesday night, as Cole Hamels was getting lit up by the New York Mets and the bat of Chris Young (the pitcher, not outfielder), I noticed something very strange up in the 400 level:  it was devoid of Mets fans.  Of course then, it was devoid of heckling.

In this piece from the Wall Street Journal, Chris Herring writes that Citizens Bank Park is a "heckle-free zone" and that the heckling of Mets fans has stopped.

The article is largely a collection of quotes from Phillies fans stating essentially that it is not fun anymore to make fun of the Mets because they are so bad that it has taken the fun all out of it, or that they did not see any Mets fans getting heckled.

1. The Phillies were not exactly exciting the crowd on Tuesday night, so what ammunition would a Phillies fan have to taunt the sparse Mets fans in attendance?

2. The Mets fans are much smaller in number.   While I am sure a lot of it has to do with the fact that Mets fans are less motivated to travel to see their poor team play on a Tuesday night in April, but Phillies games are more popular than ever, and Phillies fans are buying up all the tickets before a Mets fan has the opportunity to.

3. It was 40 degrees with 30 mile-per-hour winds. Fans were doing everything they could to bundle up; there was no opportunity to find Mets fans to heckle.

4. Phillies fans booed Jose Reyes, Angel Pagan, David Wright, and Carlos Beltran.  If we knew who the heck Brad Emmaus was we may have booed him too.

Give it time.  In the heat of the summer when school is out, many more Mets fans will buy overpriced Stub Hub tickets and take the trip down the New Jersey Turnpike.   By that point maybe the Mets are hanging around enough that they feel they have a chance to be competitive, and a Mets victory would mean so much that they would love to see it.   We will be there ready to heckle them.