Who is this Michael Martinez Leading Off for the Phillies? 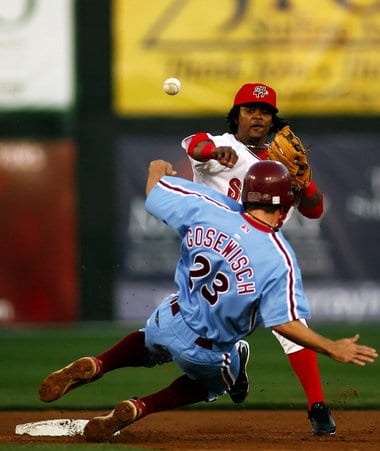 With Shane Victorino out for the day with a sore calf and no natural center fielder to take his place, Charlie Manuel wrote Rule 5 selection Michael Martinez into his spot in the lineup and place in center.

But, who is he?  Going into Spring Training, Michael Martinez was no lock to make the Phillies roster.  With competion from experienced pinch-hitters such as Delwyn Young, he had to make his mark, and many have written that Manuel was impressed with what he had to offer.

Martinez is 28 years old, somewhat old to make a major league debut.  Martinez hails from the Dominican Republic, where he was signed at the rather older age of 22.  Most Dominican players are signed at age 16 or 17, but Martinez was a professional basketball player before turning his attention to baseball.

After basketball, Martinez then took a job with the local police department, where he pretty much was a ringer for the force's baseball team.   That is when Nationals scouts noticed him and decided to sign him.

Last year, in this piece from the "Senators Notebook" from his AA team the Harrisburg Senators, his manager Randy Knorr was immediately impressed with Martinez just watching him at low A Hagerstown:

“I remember watching him and wondering, 'Who is this kid?' I mean, he played OK, not every day, but I couldn't wait to get him.”

Mostly a second baseman, Knorr encouraged Martinez to play the outfield, and did not hesitate to use him at shortstop either.

Despite the high praise from his manager, not all are impressed.  In the blog Call to the Pen, they were not very impressed when the Phillies selected Martinez this past offseason with their Rule 5 pick.

"We’re talking about a guy who hit .253/.298/.393 in Double-A this year at age 28. He almost never walks, doesn’t boast plus power, and is merely an average contact hitter and basestealer…Yes, he’s a versatile defender, but there’s a very strong chance that Martinez hits an empty .220 in the majors next year, which just doesn’t cut it unless you’ve got Ozzie Smith’s glove."

After an all-star appearance at AA in 2010, he was promoted to AAA where he hit .325 and played center field and second base.  Obviously it was enough for the Phillies to catch his eye.

Maybe he will hit .220, and maybe his hard work will will finally pay off.  We shall see.

Today is that day.