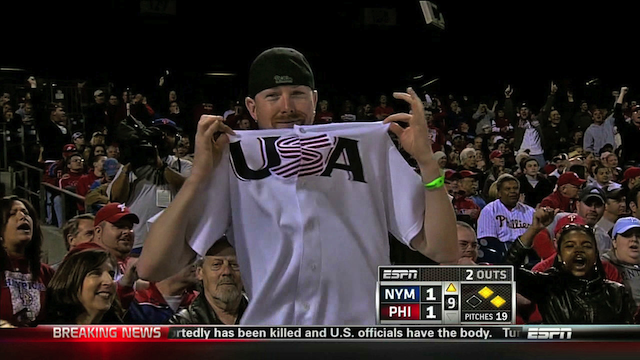 The "U-S-A!" chants at last night's Phillies – Mets game reminded of the Flyers-Rangers preseason game I attended back on September 20th, 2001, when play of the game was halted to play President Bush's speech.

After the second period ended, putting President Bush's speech up for all to see seemed like the logical thing to do.  But, the emotional part occurred as the intermission was drawing to a close.  A scroll on the bottom of the ArenaVision screen, "The President's speech can be seen on television on the concourse."

This was not good enough.  The fans began to chant,  "Leave it on!  Leave it on!"

They did.  The Flyers and the Rangers players stood on the ice and watched as fans cheered when President Bush announced that Pennsylvania's own Tom Ridge would become Secretary of Homeland Security.  The speech as a whole was a rallying point of confidence for Americans as they were returning to normal life.

There was no Republican or Democrat, Rangers fan nor Flyers fan, woman nor man anymore: everyone was an American.

After the game, my friend and I got some late admission Phillies tickets and saw the last few innings of the Phillies and Braves at the Vet just a few rows behind home plate.   Life was good, and we were off to celebrate being an American.

Jim Jackson has a segment on that day here, posted just a month ago, though must have been recorded within the last year since Jim Jackson has his goatee:

Here is the video of last night, which apparently MLB Advanced Media will NOT remove:

Once again fans were united as Americans.  Nothing would come in between.