Eagles Flyers Phillies Sixers About Us Write For Us
Phillies' Shane Victorino to Appear Live for a Full Hour on the Mike Missanelli Show
Phillies Lose Ryan Madson to the DL... Uh, Now What? 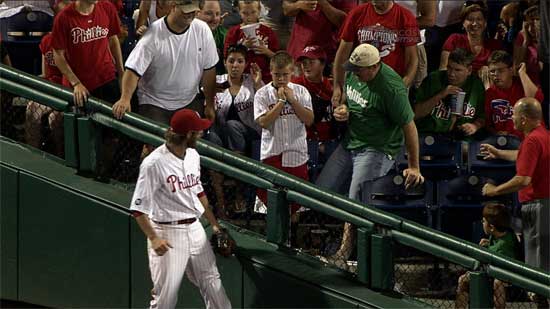 Remember this incident last year?   Well, it turns out that this fan, Patrick Boyle, was the lucky fan yesterday who caught not one, but two, according to NBC Philadelphia.

Kelly Bayliss of NBCPhiladelphia did some fancy math to determine the liklihood:

Based on an MLB.com report, approximately 30 to 40 foul balls are hit into the stands during any given game. We decided to go with an average of 35 balls per game. Divide that by the Phillies attendance average over the last five years (43,489) and you get 1,233. That means during any game, a fan has a one in 1,233 chance of catching a foul ball at Citizens Bank Park.

They declined to do the odds of someone catching two, so here's a shot:

However - NBC's math counted every fan in attendance as having an equal chance at a baseball.  My season tickets in 432 certainly have incredibly smaller odds than the fans in 128 down the line.

AND - the odds of foul ball placement would depend on the starting pitcher, and change as pitchers change.

So to do the correct calculation, we would have to see how likely that particular seat that Boyle has is to get a foul ball to begin with in any given Roy Halladay start where pitches all nine innings. 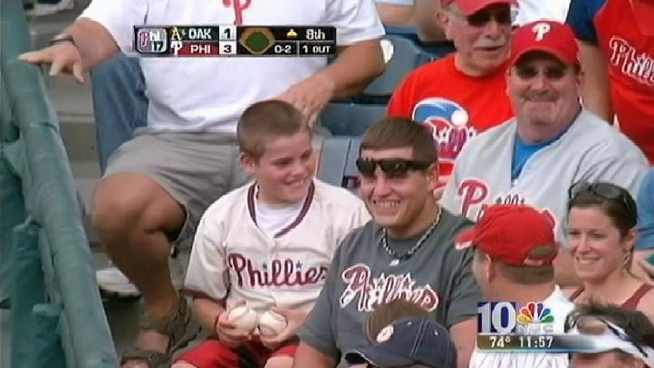