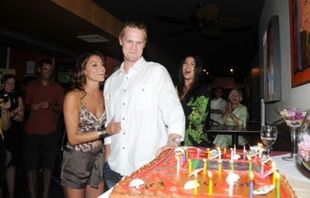 Kyle Kendrick was not happy about being pulled last night after five innings.  Apparently, his wife Stephenie La Grossa was not happy either, and was eager to battle any blogger with a smart comment.

First, the one-time "Survivor Contestent" had this to say:

Then, our very own Stephen Gallo had this to say in reply:

Uh oh… those are some fightin' words.  Stephenie came back at him:

Of course Steve needed to get one final shot in, given her wonderful spelling:

In Stephenie's defense, maybe she did mean "looser".  You know, someone who is so loose that they can handle watching Kendrick pitch without getting aggrivated?

Of course, who can blame Stephenie and Kyle for being so upset?

The Phillies bullpen has Michael Stutes and Antonio Bastardo.   Then after that, the depth chart is as follows:

Every bullpen can handle one or two of these guys, but right now the Phillies have five of them out there.

Kendrick saw what we all saw: a trainwreck coming.

Madson and Lidge could be back next week, replacing probably Mathieson and Carpenter.  Contreras wll be a couple more weeks and that will make things even lighter.   A return of Oswalt or Blanton, and Kendrick is in the bullpen again (which is not a bad thing).

Until then, the Braves are creeping up ever slightly.  The Braves, once six games back, now are three games back with three games to go against each other before the All-Star break. The Braves play Colorado today, which will push the Braves 1/2 game closer or further. Let's pretend for now they will face each other as they are now.

Let's hope that Halladay – Lee – Hamels, with 8th/9th innings from Stutes and Bastardo in one or two of these gets a sweep done.   This series can swing dramatically in each direction. A Braves win today and sweep of the Phillies puts them in first place.