Astros’ Owner: “Once you hire blacks, you can never fire them”. Oh, and Michael Bourn is Traded 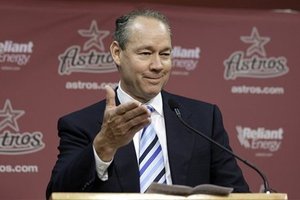 In a story that is probably underreported, new Astros' owner Jim Crane is alleged to have accumulated his weath in business using racist business practices.   And now with the trade of center fielder Michael Bourn, the Houston Astros are without a single African-American on their entire active roster.

On Sunday's "The Baseball Show" on Talk Radio 1210 AM, Seth Everett mentioned that he believed the agreement of sale was completed quickly by Major League Baseball because of all of the issues with the Los Angeles Dodgers, thus creating an opportunity to miss what may become very controversial.

Some of the allegations are pretty sharp (via the Houston Chronicle):

Eagle President Jim Crane told his subordinates not to hire blacks because "once you hire blacks, you can never fire them." On other occasions, Crane explained the reason he wanted to keep blacks out of the company was that his top managers are bigoted and they would mistreat the minorities, "giving them no choice but to sue Eagle."

Witnesses also said Crane did not permit the company to advertise job openings because he did not want to create a paper trail of unhired qualified minorities.

To discourage blacks and women from applying, Eagle managers refused to let female and minority applicants enter its secured facilities to fill out job applications. Eagle disagreed with that assessment.

Crane also warned managers not to hire women of child-bearing age because their productivity would be low. And top company officers told employees that women aren't suitable for management positions because male managers won't work with a woman.

Trading Michael Bourn may have been a solid baseball move.  (Well, maybe if they got good value in return, but that's debatable).  However, it just makes their owner look that much worse.