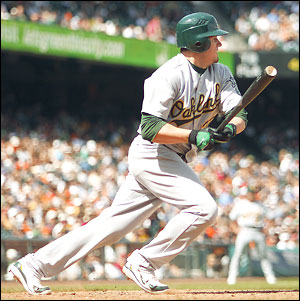 The Phillies may have picked up the Matt Stairs of 2011 when they agreed to sign Jack Cust to a minor league contract today.   Cust will become a left-handed power-threat off of the bench, who hopefully can show the Phillies something in the month of September before the postseason.

Cust is the prototypical home run hitter who can't field a position.  Of his 640 games in the major leagues, he has played just 284 in the field, usually in the corner outfield spots.   I doubt the Phillies would use him there very often, should he be given a call to the majors.

Cust has on his resume 26, 33, and 25 home-run seasons as a regular in the major leagues, and has played for the Arizona Diamondbacks, the Oakland Athletics, San Diego Padres, and the Seattle Mariners, who just released him.

Cust hails from nearby Flemington, New Jersey and attended Immaculata High School in Somerville, New Jersey where his power made him a legent.   In this piece from 2007, Cust's high school coach recounts Cust's powerful high school career:

"He was sick ," says Gambino, who was the legend's high school coach. "Students skipped class to see his BPs. Teachers went to see him hit. When the other team's bus pulled in while he was hitting, the players ­wouldn't come out — they'd sit in the bus and just watch him hit bombs. One day he hit the ball so hard it hit a truck in a field 500 feet away. The guy in the truck drove over and asked who hit it. I said, 'You want to see him, just wait a bit, he'll be up again.' The guy said, 'No. I need to get his autograph.' " The old coach shakes his head. "I thought he'd be an All-Star for sure.

In 2008, Stairs took the place of fifth starter Kyle Kendrick essentially, thanks to a Geoff Jenkins injury that left room for Stairs on the active roster in August before the rosters expanded.

Will the same thing happen for Cust?  Maybe, maybe not; I'm sure that would depend on what he does down the stretch.  What the Phillies want is a pinch-hitter sitting on the bench that makes the opposing manager scared will come up and belt a home run.

Cust and his brother own and operate Diamond Nation, a sports training facility and academy in his hometown of Flemington.