Philliedelphia’s Favorite and Least Favorite Moments from the 2011 Season

It feels too early to be reflecting on the 2011 season, but after the Phillies were knocked out of the playoffs by the Cardinals, we all need something to smile about. Philliedelphia writers have composed their favorite moments of the season, as well as their least favorite moment.

#5- Cole Hamels' triple off the wall in right field.

Did anyone see this coming? Absolutely not. We knew Cole could hit, but we didn't know he could hit and run. This ball was pretty damn close from leaving the park, too.

#4- Chase Utley's first at bat of the season.

Despite going 0-5 that night, Chase Utley was back from his knee injury, and the fans couldn't have been more excited. Hearing "Kashmir" by Led Zeppelin for the first time all season gave me chills.

Wilson's entire pitching performance was nothing short of amazing. The simple fact that he was pitching blew my mind. He did a fantastic job sending the Reds down- including Joey Votto. The cherry on top to his performance was nailing Scott Rolen, a former Phillie, with a 75 MPH breaking ball. He won the city over with that.

The man can hit. His first home run of the season came on July 9th, and sent Phillies fans on their feet, cheering so loud that the Mets fans could hear them 90 miles north. It was his first career home run. The second came exactly one month later, and was just as exciting. He does it all.

Come on, you knew it was going to happen from the moment that pitcher's and catcher's reported to spring training in Clearwater. It was such a great night in Philadelphia, and it was great seeing everyone celebrate with champagne showers, especially Hunter Pence, who might have enjoyed himself too much. Five straight years, who could have guessed that back in 2006? 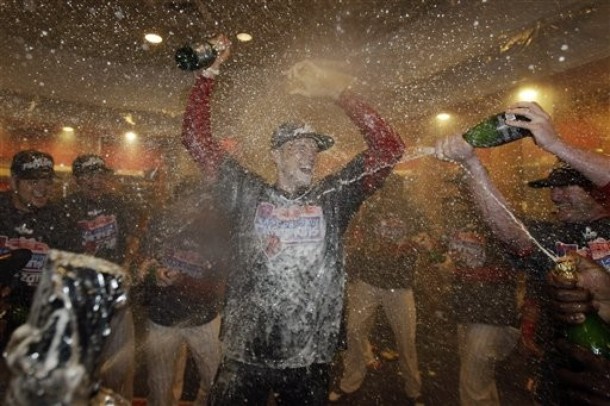 Least favorite moment of the season

Roy Oswalt left the team while they were visiting the Diamondbacks in Arizona, after hearing the news of devestating tornadoes in his home town of Weir, Mississippi. That night, he threw three shaky innings. Understandable, given the mental condition that he was in. After telling reporters that he did not know when he would be back, my heart was feeling a bit sore. I was scared for him, and scared for the Oswalt family. Thankfully, everyone was safe and sound. However, while using heavy machinery to help clean up the neighborhood, Roy had injured his back, which sent him to the disabled list. It took quite a while for him to regain velocity in his fastball, but by the end of the season, Roy was looking like his old self.