Eagles Flyers Phillies Sixers About Us Write For Us
Phillies Take On Yankees In Nighttime Game, Bastardo To Start
Kevin Durso's 2012 MLB Predictions

ESPN's Jim Bowden Says Phillies Will Miss the Playoffs; Here's Why He is Wrong 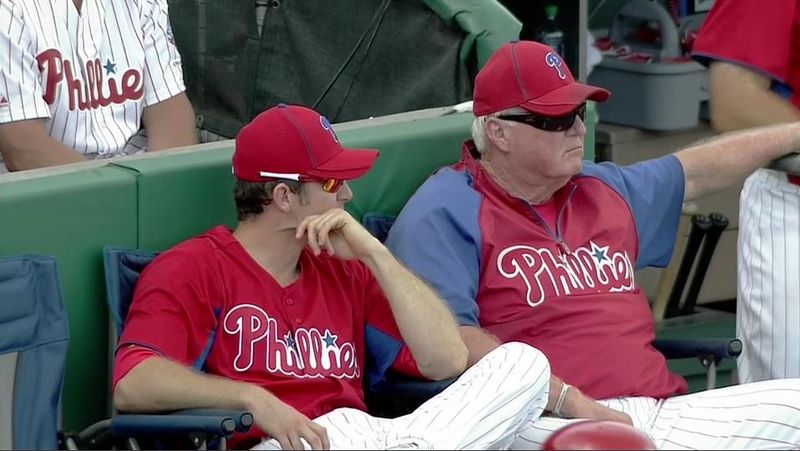 Could injuries to Chase Utley and Ryan Howard set the Phillies up for failure?

ESPN asked Jim Bowden, former General Manager of the Cincinnati Reds and Washington Nationals to write a piece entitled, "10 Bold Predictions for 2012".   One of those bold predictions:  The Philadelphia Phillies will not make the playoffs.

Really?  In a two-wild card world with a Phillies team that features Cole Hamels, Cliff Lee, and Roy Halladay, the Phillies will fall so hard they won't even grab a wild card?

Bowden actually had little to say in the piece, but in a nutshell, this was his reasoning:

"Last year the San Francisco Giants failed to make the playoffs with a rotation just as an impressive at the top with Tim Lincecum, Matt Cain, and Madison Bumgarner. However, injuries and lack of offense led to their downfall."

I do get that the Phillies face serious injury issues, but is this a bit of an overreach?  Even Bowden himself seemed to think so.  Check out this podcast from 97.5 the Fanatic where Bowden explains his rationale to Harry Mayes and Brian Baldinger.

It almost sounds like Bowden had the task of writing this piece, and decided to reach a little bit.  Certainly, he is right, there could be a disaster if one of the aces gets injured, the offense fails, and other unforeseen events occur.

Host Harry Mayes did make a valid point: this could happen to any  other team.  Mayes and Baldinger were all in agreement that the NL East is much stronger, particularly in Miami and D.C., but the Phillies still should be in the driver's seat.

But, I believe the Phillies are still clearly the NL East favorites.  Here are 20 quick reasons why:

For his power rankings?  Bowden ranks the Phillies second in the National League.

The guy's a dip shit. I hate ESPN analysts who think they know it all. All they do is talk out of their asses.

Correct me if I'm wrong, but to call this a Phillies blog read by those who have nothing better to do is not exactly savvy marketing and it is less clever than whoever wrote it thinks.