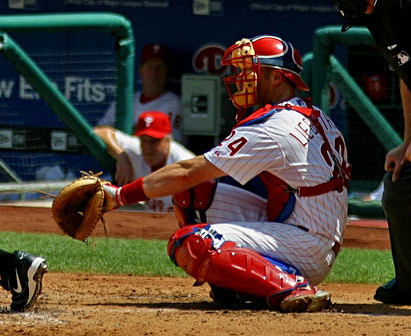 In a surprising move, Sunday evening the Phillies announced that former Phillies catcher Mike Lieberthal will return to the organization to provide catching depth in the event of an injury to Carlos Ruiz or Brian Schneider.   Lieberthal decided to hit the comeback trail, and what team would be better than the Philadelphia Phillies, who drafted him and for whom he played all but one of his 14 major league seasons.

His inspiration to return?  Andy Pettitte and Jamie Moyer.

"I saw Andy come back after a year off, which surprised me.  I felt that I had that same itch Andy had and felt I owed it to myself for one more chance," Lieberthal said in a statement.

"Jamie inspired me – if he can pitch that well at age 49, then I can certainly sit back there and catch a ball thrown to me," Lieberthal said.

The comeback trail for Lieberthal is not without its challenges.  The Phillies have two established catchers, Carlos Ruiz and Brian Schneider.

"I think we saw that even though the Phillies had two catchers last season, it's tough to get through the year without needing a third catcher.  I feel as if I can be this year's Erik Kratz and help the team down the stretch", Lieberthal said.

Lieberthal will report to AA Reading, where he hopes to catch 2-3 days a week, serving as the team's DH the rest of the way.

And, if you actually spent the time reading this whole piece: April fools.