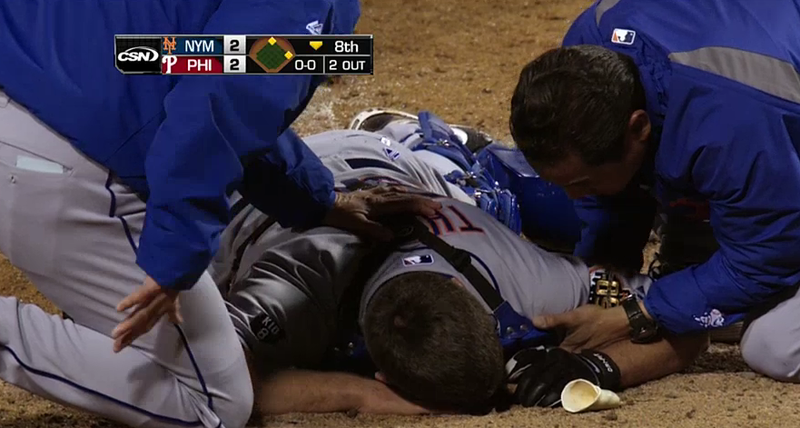 During the 8th inning of last night's game, the Mets catcher Josh Thole took a Ty Wigginton elbow to the head on a play at the plate.  Thole held onto the ball and Wigginton was out.  More and more ss we have seen with head injuries in sports, they are taken very seriously and have devistating consequences.

So when Josh Thole was down on the ground, Phillies fans sat silent.

When he sat up – applause.  When he got up and started walking – more applause from Phillies fans.  Here's some proof, as Phillies fans are applauding him in the background as he walks away. 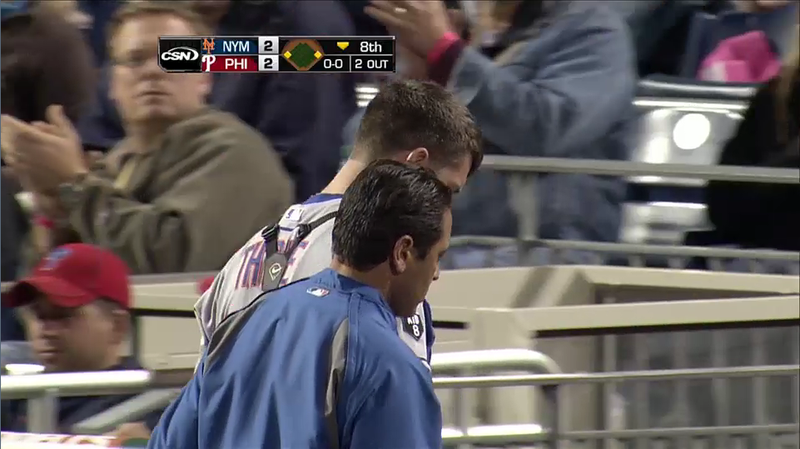 Mets blog Rising Apple relays a report that Thole could be out a week.

Jayson Werth – a much different story.  Werth was so angry after what he perceived as Phillies fans heckling him that Werth personally emailed the Washington Post (presumably typing with just his right hand):

After walking off the field feeling nauseous knowing my wrist was broke and hearing Philly fans yelling ‘You deserve it,’ and, ‘That’s what you get,’ I am motivated to get back quickly and see to it personally those people never walk down Broad Street in celebration again.”

What you may seen was Phillies fans initially excited that Werth dropped a ball.  You may have had two drunk idiots screaming something, but it is a shame that Werth and the Phillies are getting the bad rap for this.

Phillies fans will always rag on Werth as long as he is playing for the Washington Nationals.  Someday down the line when he retires he will be back and in Phillies lore once again.  The 2008 crew, one by one will end up on the Phillies Wall of Fame in an upcoming era in the way the 1993 Phillies mostly have.  Unless, of course, he truly believes the Phillies fans are that mean spirited.

Really, though, they are not, as we see by how they reacted to Josh Thole last night.