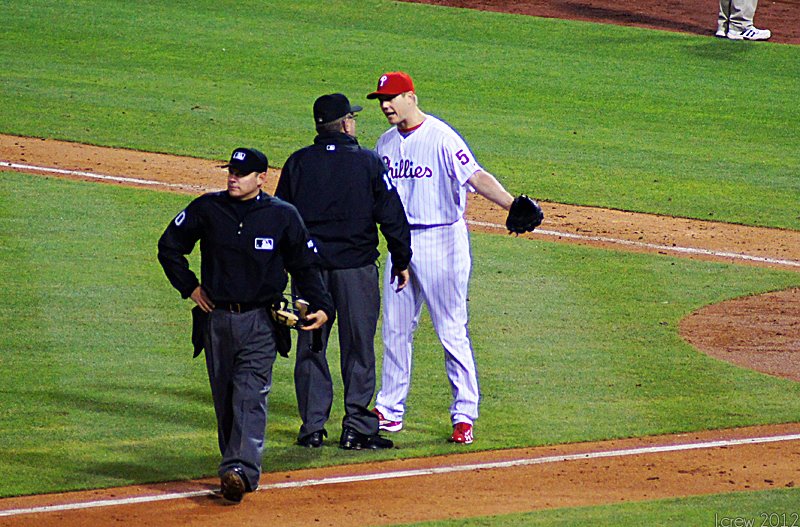 Lindsey was in the right place to catch Jonathan Papelbon after the top of the 9th inning last night en route to a Phillies 4-3 loss.

As it turns out, the ball probably was not a strike, but there were issues with the umpire all night.  It appeared that since he knew he was done for the night anyway, he might as well risk an ejection.  After the game, Papelbon kept on talking to CSN Philly's Jim Salisbury.  Here are some excerpts, inlcluding Papelbon's reaction to learning home plate umpire D.J. Reyburn was a AAA umpire:

“You’re up in the big leagues to do a good job and when you don’t do a good job you should be demoted or fired… If I don’t do my job, I go down to Triple A. There’s no room for that up here. It’s not a knock on the umpires. It’s the integrity of the game. You want to be able to go out there and play the game the way it should be played.

All night long, from Kershaw to Vance, all the way to the ninth inning, it affected the outcome of the game.”

Certainly a fine is coming.  Jim Joyce was missing from the crew tonight.  Joyce gained infamy for his blown call at first base which cost Armando Galarraga a perfect game, but it generally considered one of baseball's best umpires.  The Phillies sure missed him last night. 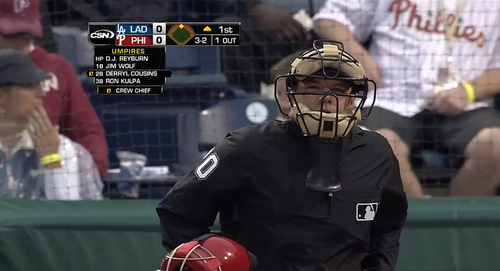