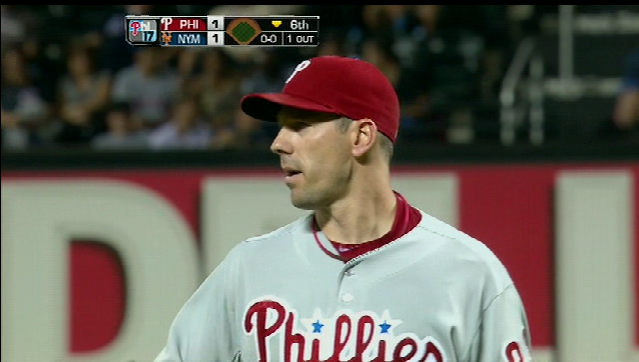 Cliff Lee is still winless on June 5th.  Granted, he did miss a few starts with an injury, but after eight starts Lee sits at 0-2 with a 3.00 ERA.   Time and time again Lee has been plagued by poor run support from the Phillies lineup.  The Phillies once again look to their traditional lineup against right-handed pitchers.

The  questionable news is the continued presence of Jimmy Rollins in the leadoff spot.  Rollins bottomed out at a .224 average on May 28th.  Since then he has rebounded all the way to hitting .242 by hitting .370 over the last seven days.  Frustration mounts among fans, perhaps due to the fact that Rollins has not been patient during this stretch, walking not even once.

What might be keeping Juan Pierre out of the leadoff spot is his dismal numbers against left-handed pitching.  In 25 at bats Pierre is hitting just .160.

Also not hot is centerfielder Shane Victorino, hitting .158 in the last seven days.  After going 0 for 4 last night, Victorino sits at .247.   As a left-handed batter, Victorino is just hitting .225.  He will hit left-handed tonight against the Dodgers right-handed starter Chad Billingsley.

The game will be broadcast on Comcast Sportsnet, 1210WPHT AM and 94WIP FM.  First pitch is scheduled for 7:05.