Eagles Flyers Phillies Sixers About Us Write For Us
Former Phillies Reliever Ugueth Urbina is Out of Prison, Wants to Pitch
Michael Young Reportedly Will Skip World Baseball Classic to Focus on Phillies 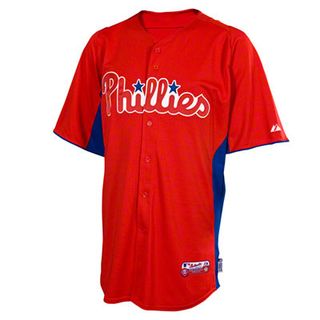 The matching jersey from majesticathletic.com

Every few years, MLB restyles batting practice hats and jerseys.  This year will feature a new batting practice hat.   The jerseys should last another year, as they seem to be replaced every three years in recent years.   The hat this year features more blue, as the model seems to be that the team's primary cover is most of the hat, with the team's alternate color doning the brim, logo, and button up top.

In theory, the players will all wear these hats throughout Spring Training and then every day at batting practice.  However, most players tend to skip the hats and jerseys prior to games, since it seems utterly silly to wear two different hats and uniforms.   Often they'll wear the gameday hat or no hat along with a windbreaker instead.

Down in Atlanta, the Braves' new batting practice hat is causing a fuss.   On Philly.com's Pattison Avenue blog they feature the controversy surrounding "Chief Noc-a-Homa" on the new Braves hat:

The Braves' wordless image of a mohawaked Native American cocking his head back can be difficult to interpret--it is hard to tell whether the man is screaming or laughing uproariously.

But one thing we interpret for sure is that the logo, originally named "Chief Noc-a-Homa," comes from a different time, when this sort of thing was... allowed to... be a thing.

They also note that the Cleveland Indians have spent the last several years phasing out Chief Wahoo from their uniforms and merchandise. 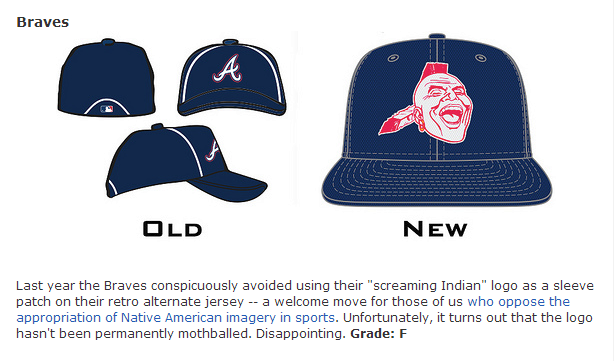