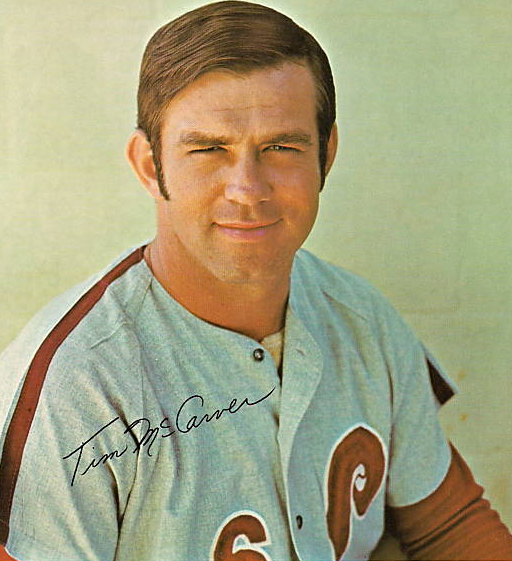 Controversial to many, Tim McCarver remains a big part of Philadelphia Phillies history.  McCarver had two stints with the Phillies, 1970-1972, and 1975-1980 and has been a national broadcaster since his retirement from Major League Baseball. On Wednesday, McCarver announced that he would retire from broadcasting after the 2013 season.

McCarver may be best known in Philadelphia as Steve Carlton's personal catcher.  McCarver and Carlton first developed a battery relationship when they came up with the St. Louis Cardinals together.  McCarver came to the Phillies first in a trade and caught Rick Wise's 1971 perfect game.  That offseason the Phillies traded Wise for Carlton and they were reunited.  After spending part of 1972 with the Expos and splitting 1973 through part of 1975 with the St. Louis Cardinals and Boston Red Sox, McCarver signed with the Phillies once again and became Carlton's catcher once more.

McCarver first retired after the 1979 season and began a career in broadcasting, first with Harry Kalas and Richie Ashburn for the Phillies.  However, he briefly unretired to return to the Phillies in September of 1980.  He played just six games and did not play during the Phillies' playoff run.  While a Phillies broadcaster McCarver mixed in some national work part-time.  After the season McCarver returned to the Phillies broadcast booth for two more season before going exclusively national.

McCarver has worked for NBC, ABC, CBS, and FOx.  Since 1996, McCarver has been exclusively paired with Joe Buck on Fox baseball broadcasts.  He has called 13 World Series.