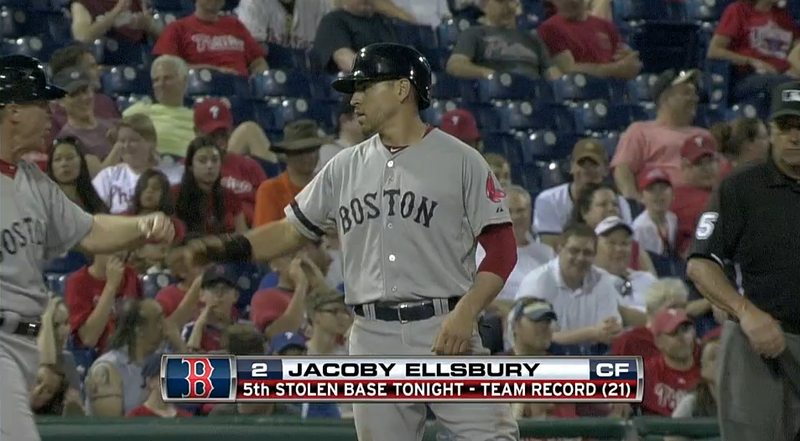 It was bound to happen at some point right?   Jonathan Pettibone took his perfect record to the mound tonight against former Phillies playoff foe Franklin Morales, making his first appearance of the season tonight.   From the start, the Phillies gave the upper hand to the Red Sox.

Pettibone got beat up in the first inning, allowing four Red Sox runs.  Jacoby Ellsbury led off with a single, followed by a Daniel Nava single.   Dustin Pedroia grounded into a fielder's choice, allowing Ellsbury to score to make it 1-0.  David Ortiz followed with a walk.  Then, Mike Carp singled to right to score Daniel Nava to make it 2-0.   After Stephen Drew struck out, Jarrod Saltalamacchia doubled to drive in two more: 4-0 Red Sox.

In the bottom of the first, it appeared the Phillies might be able to make it a ballgame again.  After Ben Revere grounded out, Cesar Hernandez got his first major league hit, a single to left field.  Jimmy Rollins flew out, but Delmon Young hit his fourth home run of the season to bring the Phillies within two.

However, those two runs would be all the Phillies would get while the Red Sox scored seven more.  Two of those runs came on solo home runs from Jonny Gomes and David Ortiz.   The last three may be particularly of interest to Phillies fans became they came off of struggling reliever Chad Durbin.  Durbin's one inning of work in the ninth inning indluded four hits and three earned runs.  After 16 appearances, Durbin's ERA is 9.00.

I was particularly impressed by second baseman Cesar Hernandez.  It was not just his two hits, but Hernandez made many fine defensive plays at second base and appeared to be fully in control at the major league level.   Granted, I have not watched him much in the minor leagues; our Rich Wilkins is VERY high on Hernandez from frequent trips to the minor leagues.   I have a feeling that when Michael Young comes off of the bereavement list Hernandez could stick around until Chase Utley is ready to man second base again.

Domonic Brown continued to hit today.  With two hits, Brown brought his average up to .267 and continued his May tear.

The Phillies begin a three-game series against the Milwaukee Brewers at home starting tomorrow night.