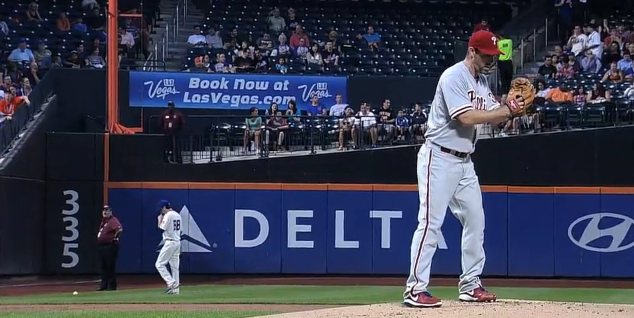 Roy Halladay wasn't brilliant yesterday afternoon, but his team still came through in the clutch to pull one out against the Cubbies. In Ryne Sanberg's return back to Wrigley Field, the place where he made himself a Hall of Famer over 15 years, the Phillies were able to come back from behind and take the game 6-5. Halladay allowed five earned runs over five innings in his second start back. Kevin Frandsen tied the game at five in the seventh and Michael Young gave the Phils the lead with an RBI single in the ninth. This afternoon, Cliff Lee (11-6, 3.07 ERA) will take on Chris Rusin (2-3, 2.64 ERA) in game two of this three-game series.

Cliff Lee, who turned 35 just yesterday, was masterful in his last start against the Mets. On Monday, Lee held the Mets to one run on five hits with a walk and seven strikeouts over eight innings. Notching his 11th win of the year, Lee pitched his ninth game of the year in which he went at least eight innings. Over his last three starts, Lee is 1-1 with a 2.35 ERA. In that 23-inning stretch, Lee has struck out 19 hitters and walked two. Lee has a dominant track record against the Cubbies, owning a 4-0 record and a 1.77 ERA in over 45 innings pitched against them. He will look to continue his dominance on the mound as the Phils seek their 63rd win of the year, which would bring them 10 games under the .500 mark.

Chris Rusin is coming off of a quality start against the Padres Sunday. Notching his fourth QS in his last seven starts, Rusin held the Padres to three hits over 6 1/3 innings of scoreless ball. Although he walked four, the lefthander struck out three. Over his last three starts, Rusin is 0-2 with a 2.00 ERA and has struck out eight hitters along with walking seven. Over that 18 inning stretch, Rusin has allowed four earned runs on 16 hits. Despite the tough-luck losses recently, Rusin still ranks high among all rookie pitchers in ERA. This will be the rookie's first career start against Philadelphia.