Cole Hamels Strong, Dice-K Not So Much, As Phillies Down Mets 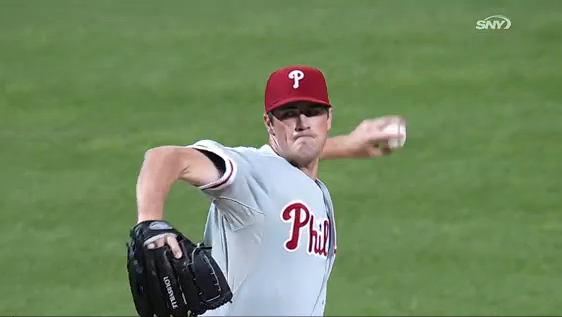 The red hot Cole Hamels took on newly-acquired Mets pitcher Daisuke Matsusaka at Citi Field tonight.   Hamels remained sharp, and Matsusaka, making just his second start in 2013, showed the rust that he is still shaking off.

The Phillies loaded the bases both in the second inning and in the third inning, but wasted both opportunities, much to the chagrin of the Phillies beat writers, who found the time between his large number of pitches annoying:

The Phillies have left the bases loaded in back-to-back innings against Dice-K, who is averagng about 5 minutes between pitches.

The Mets would score first in the third inning.   Daisuke Matsusaka would single, and be called out on your usual 8-4-6 play on an Eric Young flyout.  But Young would remain at first base and advance to second base when Juan Lagares walked behind him.   Then, thanks to nobody covering third base on a popup to catcher Carlos Ruiz, Young took third base.    Young then scored on an Ike Davis single.

The Phillies got it right back in the top of the fourth.  Pete Orr would single to open the inning, and Cole Hamels would sacrifice him to second.   After Roger Bernadina popped out, Jimmy Rollins lined a double to the left field wall.   Rollins would be thrown out trying to stretch his double into a triple, but Orr would score to make it a 1-1 game.

Matsusaka would be chased out of the game in the fifth inning after loading the bases with one out and then hitting John Mayberry with a pitch to force in a run to make it 2-1 Phillies.  Phillies manager Ryne Sandberg would pull Pete Orr for Darin Ruf when the lefty Robert Carson came into the game.  Ruf would strike out for the second out, but Cole Hamels singled in two more to make it 4-1 Phillies.

Carlos Ruiz would add another in the top of the sixth with a solo home run to make it 5-1 Phillies.

The Mets would get another in the seventh inning.  Daniel Murphy singled to start the inning.  Eric Young would bunt him to second base.  Then, Murphy stole third.  He would come in to score on a double by Andrew Brown to make it 5-2 Phillies.  Hamels would strike out Ike Davis to end the Mets threat in the seventh.   That would be it for Hamels for a final line of seven innings and two earned runs.

After B.J. Rosenberg got the Mets out in the 8th, the Phillies sprung back to action in the ninth inning.  John McDonald reached on an error by Wilmer Flores to start the inning.  Darin Ruf followed with a single to move McDonald to third base.  Then, Kevin Frandsen hit a tapper to pitcher Scott Atchinson that he could not handle, scoring McDonald to make the score 6-2 Phillies.

Jake Diekman finished out the 9th with a 1-2-3 inning to preserve the win for Cole Hamels.  The Phillies win 6-2.

The Phillies and Mets close out the series tomorrow at 1:10.