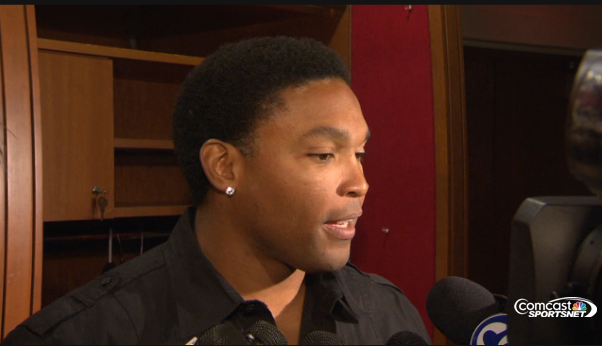 Marlon Byrd, the Phillies newest (and one of their oldest) players, spoke to CSN Philly's Michael Barkann about his 50-game suspension in 2012 for performance enhancing drugs.  Byrd says that he has an explaination, and he shared it in his interview.

Byrd explained that the positive test was the result of a botched breast reduction:

Byrd, who signed a two-year, $16 million deal to become the Phillies' rightfielder, was suspended for 50 games in 2012 for testing positive for Tamoxifen, a chemical found in the medication Nolvadex, which Byrd was using to reduce the excess tissue in his breasts. Tamoxifen was banned by MLB and Byrd paid the price.

"I made an inexcusable mistake," Byrd said in a statement then. "Although that medication is on the banned list, I absolutely did not use it for performance-enhancement reasons. I am mortified by my carelessness."

Byrd said that he took a generic version of Tamoxifen, and while he realized Tamoxifen was on the banned list, he did not see the generic name of the drug on the list and took it, thinking it would be okay.

Corey Seidman of CSN Philly says that the suspention "sounds different than most" and tends to believe Byrd:

Byrd's PED case sounds much different than most, and while it's impossible to get to the bottom of any player's true intentions from the day they first took the supplement that eventually saw their reputation tarnished, Byrd's motive, forthrightness and overall good attitude about the whole thing makes you believe him.

I am afraid that I do not.   This disappoints me, since I was a huge Marlon Byrd fan from the time he played at AA Reading. I still have the signed Marlon Byrd Reading Phillies card I was lucky enough to get him to sign before a game.  I own a #29 Marlon Byrd Phillies batting practice jersey from 2004.  If anyone wants to believe Byrd, it's me.

MedicineNet says that the Tamoxifen, what Byrd tested positive for, is used to treat breast cancer:

Does Byrd have breast cancer?  He did not say so, if that is the case.   So why would Byrd take it?  Well, Steroid.com has an explaination:

Nolvadex actually has quite a few applications for the steroid using athlete. First and foremost, its most common use is for the prevention of gynocomastia. Nolvadex does this by actually competing for the receptor site in breast tissue, and binding to it. Thus, we can safely say that the effect of tamoxifen is through estrogen receptor blockade of breast tissue (1), especially since total body estradiol increases with use of tamoxifen. Clearly, if you are on a cycle which includes steroids which convert to estrogen, you may want to consider nolvadex as a good choice to run along side them.

In other words, if you are trying to avoid the side effects of other drugs that give you breasts (gynocomastia), Nolvadex can help make the breasts shrink, because no man would like to have breasts.