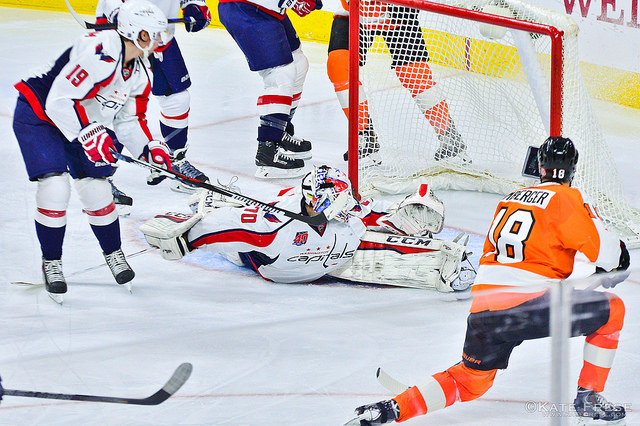 Twice already in the 2014-15 season, the Flyers have been locked in tight contests with the Washington Capitals. The stakes for the Flyers are growing by the game and on Sunday they are astronomical.

The Orange and Black open a four-game road trip on Sunday afternoon in Washington as they face the Capitals at 3 p.m. from Verizon Center.

The Flyers enter Sunday's game 11 points out of the final Wildcard spot behind the Bruins. The Capitals currently hold a 14-point lead on the Flyers in the standings while occupying the final guaranteed spot in the Metropolitan Division. The Flyers have two games against the Capitals and a game at hand as well.

A four-game winning streak was snapped on Thursday by the Islanders in a 3-2 shootout loss for the Flyers. Since returning from the All-Star break, the Flyers continue to get contributions from unlikely sources as the top line is contained.

Chris VandeVelde has been the hottest scorer of late, scoring five goals in his last seven games.

Part of the reason for the Flyers five-game points streak is Steve Mason. The Flyers had a chance to increase the win streak to five on Saturday because of the goalie. Mason will be in goal again on Sunday. He is 11-12-7 with a 2.30 GAA and .925 save percentage.

The Capitals enter the game on a hot streak of late, winning their last three games. Two players that are red hot are Nicklas Backstrom and Alex Ovechkin.

Ovechkin has been a scoring machine. The winger has five goals and seven points since the All-Star break. Ovechkin is also leading the team with 32 goals, also ranking second in the NHL.

Backstrom is the team's leader in points with 54, ranking fifth in the league. His 38 assists also lead the Capitals and are third in the NHL. Since returning from the All-Star break, Backstrom has one goal and six assists.

Marcus Johansson, Troy Brouwer and Eric Fehr are dangerous players up front while Mike Green and John Carlson are players to watch on the blue line.

In goal, the Capitals will start Braden Holtby. Holtby has been the workhorse of the Capitals this season, starting 45 games this season. Holtby is also second in the NHL with six shutouts this season, including one against the Flyers. He is 25-10-9 with a 2.14 GAA and .925 save percentage.