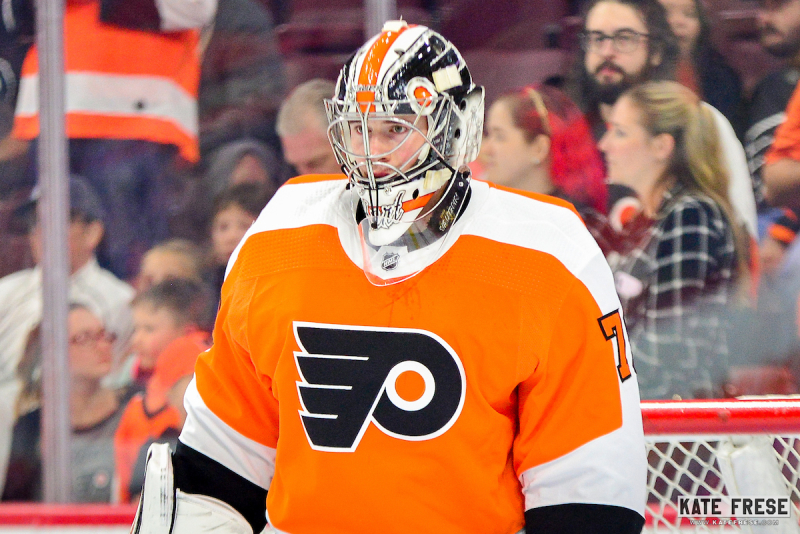 It's certainly a new day and a new look for the Flyers. Chuck Fletcher is in the GM booth, just over two weeks into his new job. Scott Gordon will be behind the bench as the Flyers interim head coach. A new face will be in goal too.

With all of that happening, the Flyers get back to action following a disappointing road trip that forced the team's hand to make a coaching change. They take on the Detroit Red Wings on Tuesday night looking to start anew with a win.

Nolan Patrick has struggled mightily of late. His last goal was on Nov. 10. He has just one point in the 14 games since. Yet Patrick could be on the first line with Claude Giroux and Travis Konecny if the lines from Monday's practice hold up. This is an opportunity for him to get going, and the Flyers certainly need him to soon.
Speed is the name of Andreas Athanasiou's game and if he can use it to expose the Flyers, he's got finishing ability. He hasn't scored a goal in nine games, but the Flyers have been a cure for goal slumps lately.

It's the moment many have waited for. Ready or not, Carter Hart is in for the Flyers. Hart was called up on Monday and will make his NHL debut on Tuesday night.

Jimmy Howard has been fairly steady for the Red Wings this season, picking up 10 wins in his 22 starts with a solid .922 save percentage. Howard has wins in three of his last five starts.

Phil Varone and Oskar Lindblom are back in the lineup on the fourth line with Jordan Weal and Jori Lehtera sitting out. The forward lines were shuffled at Monday's practice, but remained the same on Tuesday. The defensive pairs had a new look on Tuesday morning as well.