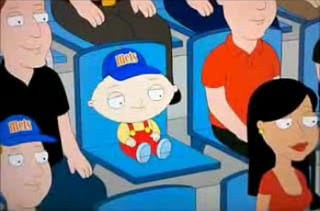 Opening Day is the one day on the baseball calendar when all teams are optimistic about their chances for the year.

Even for the Mets, some of the old core players are gone and the younger players have an opportunity to step up and showcase their abililties.  Right?

Well, a producer from the Mets television network SNY decided to show a clip from the most recent season of Family Guy, in which Stewie shows his distain for the Mets.

The New York Post says the producer's bosses were "seething" at the clip.  Why discourage Mets fans from watching the broadcasts?