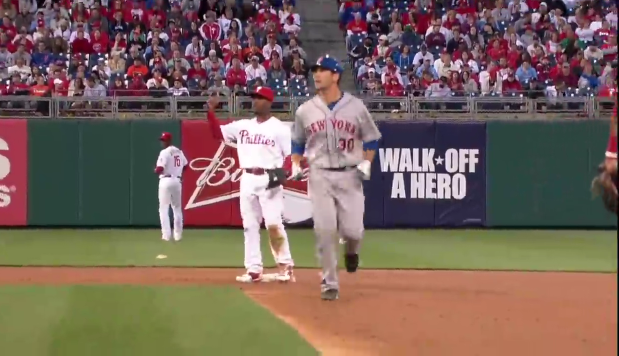 Well, many people, such as this Deadspin report, and this official MLB tweet seemed to think Jimmy Rollins or Jim Thome tricked Mets catcher Josh Thole into an out on Friday night.

Josh Thole, it turns out, told ESPN's Adam Rubin that Jimmy Rollins was simply trying to be helpful and told him to go into second base easy, as a matter of professional courtesy:

“I was coming into second, and Jimmy put his hands up, like, ‘Come in easy. You can come in easy.’ And I knew the ball was fair. I even looked down. The ball was on the floor. And I just took off running back to first. I’ve got no other explanation.”

The professional courtesy of a shortstop letting the opposition know it is okay to stand going into second base to avoid injury?

“That happens quite often,” Thole said about the shortstop putting up his hand to signal the play is uncontested. “And typically I just slide to slide anyways, just to make sure. It was definitely a lackadaisical play on my part to say the least.”

This morning a Mets fan called up MLB Network Radio and felt that the Phillies pulled a dirty joke on Thole.  Turns out, Thole's performance was the only joke.

The incident prompted many funny tweets, such as this Gus Ramsey joke, "Josh Thole was thrown out trying to steal first!"

Watch the play here on MLB.com.

If you enjoy catchers doing stupid things on the basepaths, check out this Kelly Shoppach play from last week.