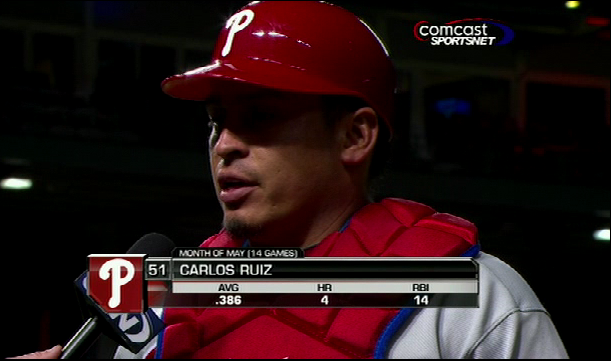 Phillies catcher Carlos Ruiz was a late scratch before the Phillies Memorial Day 1:00 p.m. game in New York at Citi Field.  He was said to be "day to day" at the time.

But, the AAA Lehigh Valley Iron Pigs played a night game and pulled from the original lineup was Iron Pigs catcher Erik Kratz.

1) Carlos Ruiz is headed to the disabled list.  The Phillies would be devastated to lose Ruiz and his bat, which was pretty much carrying the Phillies for the month of May.

2) Roy Halladay is headed to the disabled list.  A Kratz move coupled with Thursday's off day would give the Phillies a few days to figure out how to replace Halladay and at the same time provide insurance for the sore Ruiz.  Halladay's regular return in the rotation would have been Saturday.

Dave Bush started tonight for the Iron Pigs.  he could pitch on Saturday or Sunday; Scott Elarton pitched yesterday and would also be available either day.

If Kratz indeed is headed to the Phillies, neither scenario is good.