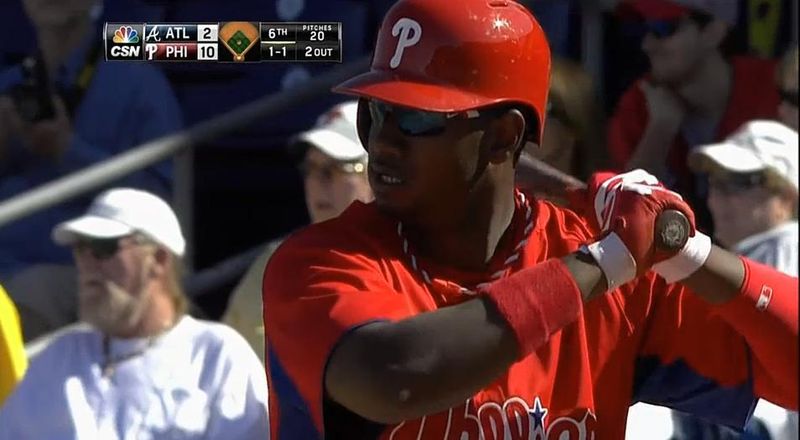 Domonic Brown looks like a new man this Spring Training.  Having gained reportedly 10 pounds of muscle this offseason, the Zephyrhills, Florida resident spent much of the offseason in nearby Clearwater.   Therefore, Brown was one of the first players Phillies Assistant Hitting Coach and former California Angels start Wally Joyner met in camp.  For Brown, the two meeting was supernatural.

The Inquirer's Matt Gelb asked Brown what helped contribute to his strong start this Spring and Brown pointed to Joyner:

"It seemed like God maybe sent an angel down toward me."

Joyner ponted to an adjustment to Brown's hands:

"We straightened his hands out a little bit, allowing his wrists to cock," Joyner said. "He's a big boy. He looks great. We want to take advantage of that size and leverage. That's one of the assets that Ryan Howard has. And he uses it. He has a lot of leverage. He stays behind it."

After going 1 for 3 today with a walk, Brown is now hitting .417 in the early going this Spring.  He has two home runs, three RBI and three walks.  His OPS is 1.563.    Of course that will not be sustainable, but what would we be saying if Brown was say, 1 for 11?  The hot start already has Phillies fans excited and thinking of the possibilities of what a renewed Brown could bring to the Phillies' lineup.

The left-handed Joyner likely will be working more with Brown, though Steve Henderson is the primary hitting coach.  The new arrangement is designed to give hitters more time with their coach in an era that is heavy on film.    Having worked with coaches Milt Thompson, Greg Gross, and now Joyner and Henderson, Brown may have found his comfort zone.

Hopefully Brown's confidence can help him be the player that Phillies General Manager Ruben Amaro Jr. refused to trade for Cliff Lee or Roy Halladay. The untouchable prospect has finally been touched.

Finally, a coach that speaks to Brown?

His hands are noticeably lower, and his bat speed has increased. Along with his patience, that spells breakout season!