Eagles Flyers Phillies Sixers About Us Write For Us
Phillies bats secure series win over Mets
Around the NHL: Ducks, Penguins, Predators Advance to 2nd Round 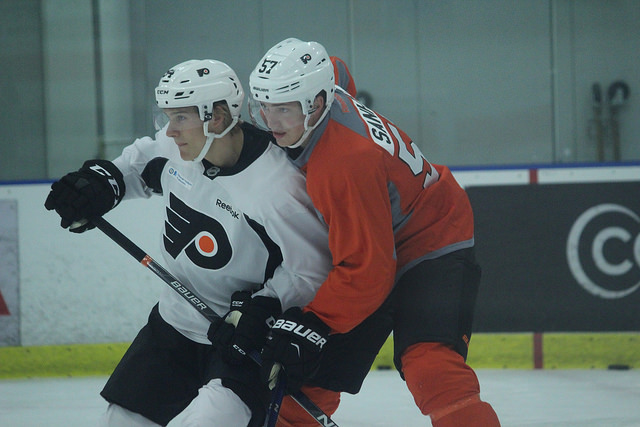 The Flyers will be getting a significant infusion of new talent this summer. At both the NHL and AHL, new players will be striving to earn spots at the professional level or coming to North America to continue their professional careers.

The Flyers expect several players to make a push to be on the roster when the season begins. There are two spots open on defense with the departures of Nick Schultz and Michael Del Zotto.

It appears that Sam Morin and Robert Hagg have the inside track to fill those roles. Both made their NHL debuts late in the season playing one game each and looked right at home. Both players were selected in the 2013 entry draft. Morin was taken in the first round with the 11th overall pick and Hagg in the second round with the 41st pick.

Both Philippe Myers and Travis Sanheim are seen as having higher ceilings and being better all-around defensemen. However, Morin and Haag have been playing professional hockey for three seasons now and that goes a long way to preparing them for the NHL.

Both Myers and Sanheim will be with the Flyers soon, but it will most likely be a bit longer before they make the jump.

Forward Oskar Lindblom is anticipated to carve out a top-nine wing slot for himself in September. He is currently playing in the Swedish Elite League championship series with his Brynas team. Lindblom was a standout player all season as he battled for the league lead in scoring ending up third in scoring with 22 goals and 25 assists for 47 points.

He also has 14 points in 16 playoff games helping lead his team to the championship series.

Lindblom was a fifth-round pick in 2015 with the 138th overall selection and has impressed ever since. He made a name for himself in the 2015 IIHF Under 20 tournament scoring four goals and nine points in seven games. Ever since that tournament, he has turned heads and has shot up the prospect rankings.

Lindblom is primarily a left winger, but can play either side. However, the Flyers are much weaker on the left, so that is most likely where he will play. Lindblom playing left wing on a line with Sean Couturier and Brayden Schenn to start the season is an intriguing idea.

Mike Vecchione was signed earlier this month and played in two games with the Flyers down the stretch. He is expected to by in play for a fourth-line role come September, where he could start the season as the fourth-line center.

Those four players joining the Flyers would be significant change from the most recent season, potentially driving improvements on both offense and defense. They also add speed, energy and creativity as well as size and strength to the roster, attributes that have been missing from the Flyers performances night in and night out on the ice. Mixing them in with the more seasoned Flyers players, as well as recent rookies, could lead to more on ice success.

The Phantoms, meanwhile, will need to replace Morin and Haag on the roster. Mark Friedman was recently added to the Phantoms on an ATO and signed a three-year entry level contract. He will join the Phantoms in the fall as a regular starter.

Friedman plays a similar style to Shayne Gostisbehere. He is not a big body at 5'10" and 195 pounds, but has offensive attributes. He skates well and has good passing skills and also adds another right-handed shot to the blue line.

Myers replaces much of the size of Morin. He stands 6'5" and 210 pounds, and is a fluid skater with excellent passing and skating skills. Myers is not as physical as Morin, but has all the potential to be a top-pairing defenseman with his two-way ability.

The Phantoms blue line will not be lacking next season. Myers would have been a first-round pick last year had he entered the draft. Sanheim was taken 17th by the Flyers. Friedman was taken in the third round at 86th in 2014. Perennial AHL points leading defenseman T.J. Brennan along with Mark Alt will provide the Phantoms with a top notch defense corps.

In addition to young defense prospects, the Phantoms look to add recent draft selections made that added depth to the forward corps. Recent players finishing their junior careers will look to make the transition to the professional ranks.

Samuel Dove-McFalls was drafted in the fourth round at 98th in 2015. He just finished his junior play with the Saint John Seadogs. He helped lead his team to a first-round series victory and increased his performance in the final year of juniors improving his point total to 53 from his previous high of 34, and also was a solid plus-21 on the season. He tallied career-highs in goals with 17 as well as assists with 36.

He adds another big body and he is not afraid to use his size to win battles along the boards. Standing 6'2" and just shy of 210 pounds, he can add some size and toughness to the Phantoms. He can play either center of left wing. Dove-McFalls currently projects to be a solid third-line contributor.

Another player who looks to make the move to North American hockey is Russian center Mikhail Vorobyov. Vorobyov made a name for himself at the last IIHF Under 20 tournament. He led all players in assists with 10 in seven games. He became an international highlight with his ability to get the puck to his linemates from any area of the ice. He particularly stood out creating from behind the net.

Vorobyov showed off his skills for the international audience. He has great hands and is a slick passer who sees the ice very well. Like Dove-McFalls, he has size and strength to contribute to the roster, standing 6'2" and 207 pounds.

It has not been announced that he is officially making the move to North America, however, his KHL contract expires in 10 days and neither he, nor his team have made any comments about his being extending and staying in Russia for another season.

Flyers GM Ron Hextall has regularly said his goal is to get younger and better each season. This offseason the organization looks to make great strides in the direction at both professional levels. The significant infusion of new blood should, in addition to the skills of these players, add a lot of excitement to the rosters and it will be fun to watch the prospects take the next step in their growth as players.

Lindblom was a young star in the Swedish league and looks to pick up with the Flyers as a valued contributor to the roster. Vorobyov has been mostly relegated to bottom 6 roles in Russia, but really made a splash at the World Junior Championships last summer. They are both big bodies with skill and a high hockey IQ.

Myers and Friedman are high-level talent who will contribute with the Phantoms taking up where Haag and Morin are expected to leave off.  Myers is ranked in the Top-20 of NHL prospects waiting to make their professional debuts.

It will be a fun development camp leading into rookie and training camp for these young players. They all have the ability to contribute at the professional level and add excitement for the fans as they watch the new players take their spots on the Philadelphia rosters, which will get younger and potentially better this offseason.