A Day with Doc 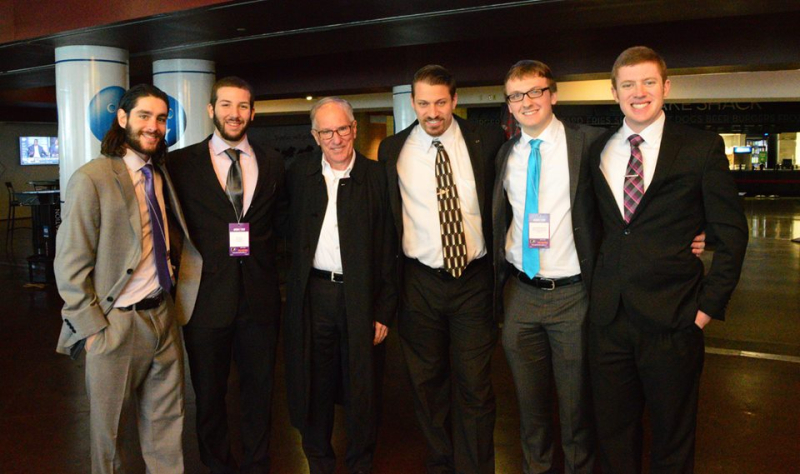 Visiting a pro hockey team's press box is always a thrill, and that was especially it was especially so for me on Dec. 20, when I again spent the day and evening at the Wells Fargo Center when the Philadelphia Flyers faced off against the Detroit Red Wings.

What made it even better was that I was joined by my best friend and fellow devoted hockey media member Matt “CC” Bevenour.

We arrived in South Philly at 10 a.m. and after picking up our media credentials joined Andrew Mossbrooks, Tyler Barczak, and Tony Liberto who, like Matt and myself, are all "mentorees" of veteran hockey writer, broadcaster and historian Bruce "Scoop" Cooper and took in the two teams' morning skates.

During the practice we saw several members of the Flyers doing countless special drills including one particular player who I was quite interested in his workout regime: Jordan Weal. Weal would pick up a burst of speed then swiftly make sharp turns back and forth, working on his edges in the scenario that he was being chased around.

In addition to Weal, other players getting some extra getting extra workouts with the assistant coaches were Travis Konecny and the injured Michal Neuvirth and Brandon Manning. Detroit only had half a dozen players for their morning skate session, as they arrived to Philadelphia roughly around 2:30 a.m. following a 6-3 victory over the New York Islanders the night before.

Following the morning skate, we joined five-time National Emmy award-winning NBC broadcaster Mike "Doc" Emrick, the only broadcaster who is in both the U.S. Hockey Hall of Fame and the Hockey Hall of Fame. The seven of us went to the Cure Insurance Club where we had a two-hour lunch with Doc and talked about hockey, our career paths, our plans for the future in the field and he provided each of us with his.

This remarkable “round table” discussion far exceeded the expectations of Matt, Tyler, Andrew, Tony and myself, as we each spoke on what we thought the others could do as we were looking to help each other out anyway we could. Both Doc and Scoop were speechless for most of it as they were soaking in all of the information we shared with each other.

It was truly a great day for each of us as we were able to spend time with America's most "decorated" hockey broadcaster ever. Doc also agreed to listen to some of my previous radio play-by-play broadcasts for my school’s radio station (East Stroudsburg University, 90.3 WESS-FM) as well as those of the other guys and would give us his feedback on our broadcasts.

Following lunch with Doc, he left to prepare for the night's matchup between the Flyers and Red Wings. The rest of us spent a couple of hours together in the Flyers' press room talking, laughing and truly enjoying ourselves. Not only did we witness a great hockey game between the Flyers and the Red Wings, but we also got to "hob nob" to some fantastic hockey people as well.

Following the game, the seven of us reunited and walked out of the arena together. We all thanked Doc for an incredible time as it was a remarkable day.

Overall, it was another successful and amazing day for me as I develop my career and I cannot wait until we are all back once again at the Wells Fargo Center.