Eagles Flyers Phillies Sixers About Us Write For Us
Around the NHL: Hurricanes Vindicated, Sabres in a Tailspin, and a Meager Western Playoff Race
Eagles Sign Veteran Safety Andrew Sendejo

Haloti Ngata didn’t make himself a fan favorite in Philadelphia. He was sidelined with injuries early on in the season and never seemed to make a major impact on the game.

Not being a fan favorite has nothing to do with not being a good guy and better teammate, however. Ngata had developed friendships during the 2018 season and one of those friendships was with veteran defensive end Chris Long. This friendship caused Ngata to hike Mt. Kilimanjaro with Long and former Eagles defensive tackle Beau Allen in support of the Waterboys, a part of the Chris Long foundation and part of the reason Long was awarded the Walter Payton Man of the Year Award.

While he was certainly happy to help the foundation, Ngata found a way to utilize hit position on the hike.

Upon reaching the peak of the mountain, Ngata took a picture with a custom-made flag that he would share to Instagram. 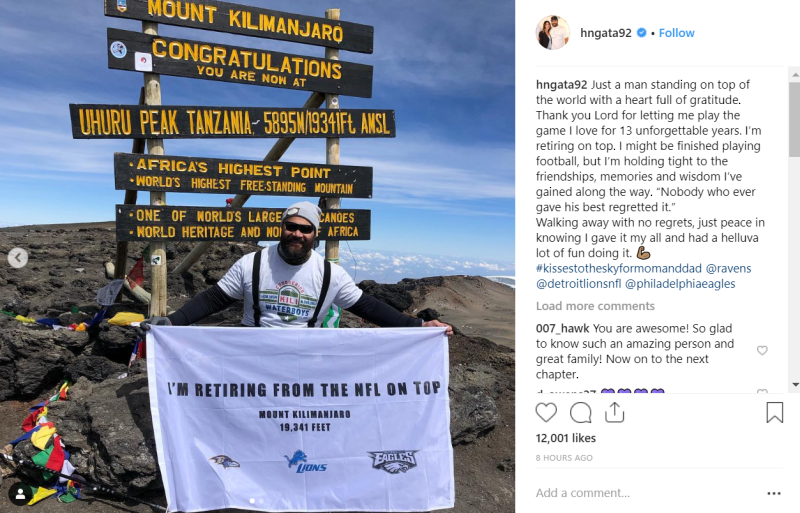 On top of the mountain, Ngata announced that he would be ending his 13 year career in the NFL.

Ngata spent just one season in Philadelphia and there seemed to be next to no chance that he would return following the addition of Malik Jackson at defensive tackle.