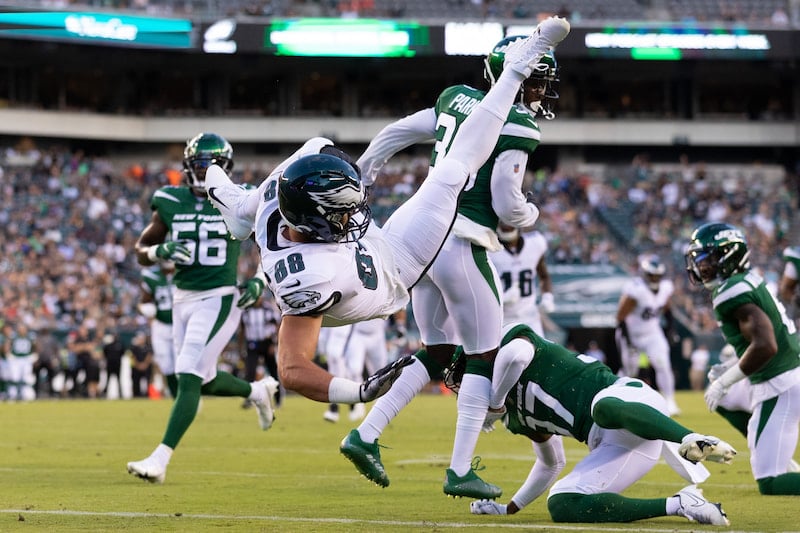 There are many reasons that Eagles fans may have tuned into tonight’s preseason game.

This was the debut for new Eagles like AJ Brown, who the team acquired via a draft-night trade, and Jordan Davis, the team’s first-round selection.

It also provided a glimpse of what this new hybrid defense, which has added strong linebacker depth and positional versatility to the front seven, could look like for the Birds in their quest to get back to the post season.

The defense looked, with some exceptions, great on both first and second teams. The offense, however saw more of a drop-off from first to second units. Still standouts from both side began stating their cases to be worthy of one of those 53-man rosters.

The Birds wound up losing this one after a special teams disaster where the Birds game up a 50-yard kick return with under two minutes left in the game. Luckily, this game doesn’t count in the standings, but special teams should be one of the things these guys do to help build their case for a roster spot and such an egregious error (that helps to lose the game, nonetheless) is not going to reflect well with the coaches.

Fans could be forgiven if they were a bit upset when the Eagles used their second-round pick on another offensive lineman. It wasn’t the sexy pick and they didn’t necessarily need help at the position group this season. That said, it was a pick intended to build for the future and, with Kelce out, Jurgens is getting plenty of playing time now that he may not get later. He already looks like a monster. Perhaps what is most encouraging are his blocks well down field – very much similar to what Kelce himself has done throughout his career. It’s encouraging to see him be so successful so early on. He probably could have been highlighted more in this game if the Birds had used a running back with better vision that could see and use the holes he created rather than taking the play elsewhere.

The broadcast was hyper focused on Jordan Davis, for good reason, but Dean was the most consistent player on the Eagles defense. It seemed like he was involved in any run play the Jets called. His snaps were limited, but he still ended with five tackles. The one thing I’d like to see more is for him to use his spot to jump routes. There were a few times that he probably could have broken sooner and been in line to either deflect or intercept a pass. That should be something he gets more comfortable doing as he gets more familiar with the defense and on this stage.