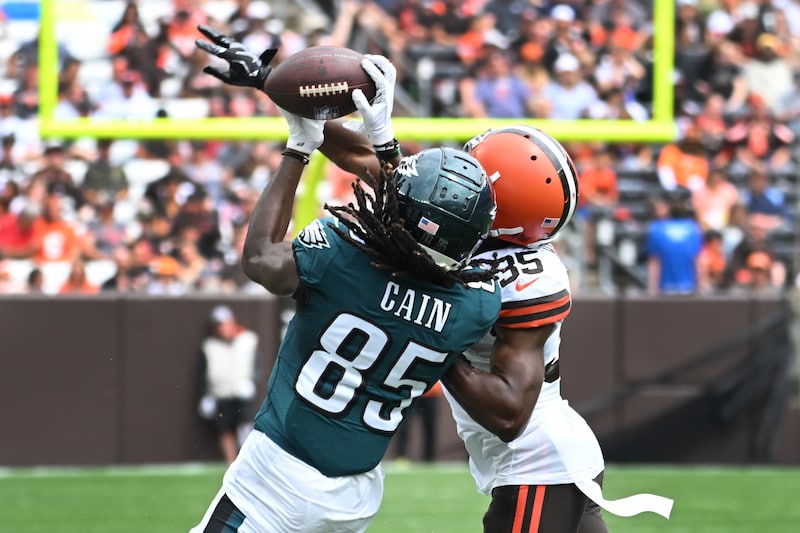 To no surprise, the first-team did not play in the second preseason game. That said, it made this game all that more important to those fighting for a spot on the roster.

After the second game, who has stood out and who has not?

Note: An honorable mention should be made for track star Devon Allen, who had a deep catch for 55 yards and a touchdown. It would have been nice to have seen him make a play like that against at least the Browns second-team, but it may be enough to get him in the conversation for a practice squad spot.

The roster seems almost set at receiver with the Eagles having perhaps the deepest the position has been in decades. While players like Reagor and Ward are competing to be on the roster, it almost feels like the once-highly thought of players like John Hightower only have a shot at a spot if the Eagles can pull off a trade to get some draft capital for a player like Reagor. That decision was made more difficult Sunday as Deon Cain was nothing short of impressive. He made five catches for 66 yards and while at least one of his other two targets probably should have been caught, he showed an impressive ability to go up and get the ball and to fight off defenders in close coverage to do so. Cain is a player who really wasn’t a big splash kind of signing, but if he continues to show up like this in camp and in game three, he might not even make it through waivers to be stashed on the practice squad and he may just force the Eagles hand into some sort of trade.

Chachere has seemed to many a lock for the 53, mostly because of the fact that he is a “Gannon Guy” and he was with Philadelphia last year. That said, the top “Gannon Guy” that was brought in last year was Eric Wilson and he performed so poorly that he was cut midseason and the team improved as a result, so that shouldn’t be a factor that guarantees a spot. In the second preseason game, Chachere recorded four tackles, but he also failed to complete a sack on an unimpeded play then was outrun by the quarterback. That’s the type of play that makes a player stick out, and not in a positive way. With the way K’Von Wallace, Jaquiski Tartt, and even the recently-acquired Ugo Amadi performed in the same match-up, it’d be hard to see the team part with any of those three as a back-up in favor of the incumbent Chachere, particularly if this has been evident in practice.

Dillard is someone who may not be on the Eagles 53-man roster come the start of the season, but he will be on someone’s 53-man roster. Dillard was perhaps the top player on an impressive offensive line. He’s someone who will either be one of the Eagles top back-ups or someone who will be starting for another team that has an attractive offer for him. He pushed anyone in front of him around and made himself the most impressive player on the field. It was a performance that reassured the Eagles’ assessment on him and perhaps made other teams consider what they would really need to trade to get him on their roster.

Now, Taylor isn’t likely to find himself off the roster completely given his status as a third-round pick project from last year, but his showing in the last preseason game left plenty to be desired. Taylor’s way onto an NFL roster is using his athleticism given his lack of tape, but particularly as the spy he was routinely late to break on runners. Most of the time, even the quarterback was able to get by him on a run before Taylor reacted and cut off the edge. When is role is as a spy specifically to stop that, that isn’t great. It isn’t like Taylor doesn’t have the speed, he just appeared to be late reading and breaking on what was happening. The good news is that is something that could be addressed over time, but time may be something that isn’t in as high a supply as it was with the weak linebacker room the Eagles rostered just a season ago.

We already discussed Andre Dillard and, at this point, Cam Jurgens is an easy lock (and not just because of his draft status), but Jack Anderson is someone who has also really stated his case last season. A seventh-round pick of the Bills in 2021, the Eagles poached Anderson off their practice squad last September and could prove to be yet another gem the Eagles have found for essentially no cost on the offensive line. If there was one player who looked as dominant as Andre Dillard did for the Birds, it was Anderson. The Eagles have, as always, a crowded offensive line room, but Anderson is a player that appears to be forcing the Eagles hand, whether that be via a trade or keeping an extra lineman on the roster. What Anderson really has going for him is his versatility. While Dillard is valuable as a left tackle backup, he can’t play another position. In this game alone Anderson was impressive at both guard and center. That, combined with his play, will get him the eyes of most any front office and the Eagles are not likely to pass up talent on the lines.

Sinnett had some flashes again, particularly the deep pass to Devon Allen, but otherwise his offenses sputtered once again. Deon Cain made catches in traffic but otherwise there were very few passes of interest to talk about and a few times that he made his intention too obvious and allowed a route to get jumped for what would likely be an interception if it wasn’t against someone on the Browns third or fourth team. Sinnett may benefit from the Eagles deciding they need to keep three quarterbacks on the roster, but he’s not shown much of anything that should really force the Eagles to keep him around. With the aforementioned roster crunches at receiver and offensive line, his level of performance may endanger his spot on the 53 as it wouldn’t be a surprise to see the Birds opt to keep someone like Cain or Anderson around instead of a quarterback simply for the sake of having a third quarterback.