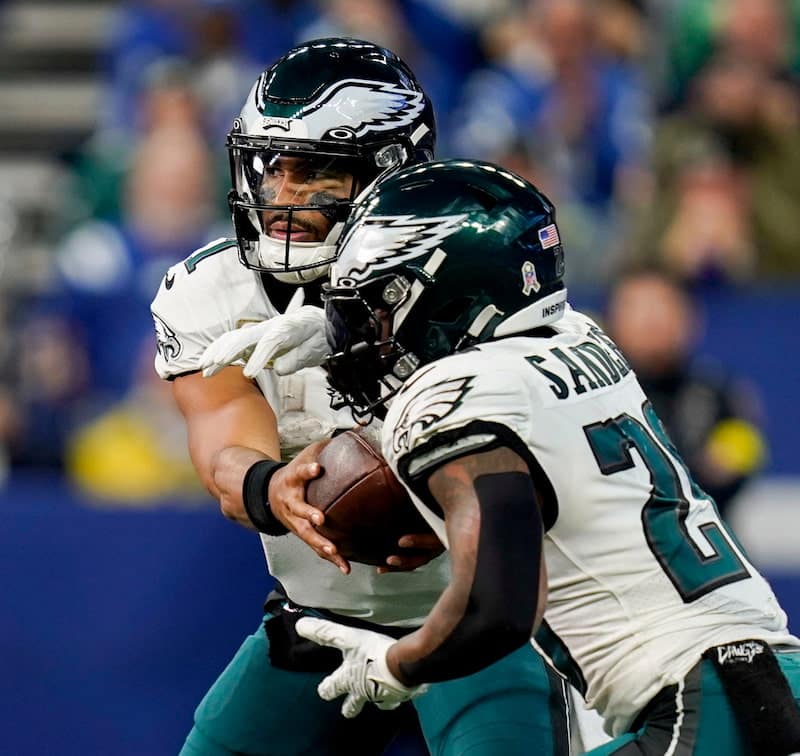 The Philadelphia Eagles (9-1) are back home and look to keep their win streak alive again versus the Green Bay Packers (4-7). The Packers have struggled all season long to get something going for the team, and in crunch time, they look to get off on the right foot on the road in pursuit of the playoffs.

2020: The two teams last met in the NFL Covid year, where Green Bay won at home, 30-16. The Eagles took an early lead in the first quarter and lost it after that. The important thing to note is that what sealed the deal is an Aaron Jones 77-yard run for a touchdown. The Eagles will be facing an unstoppable Jones tomorrow.

Now that the Eagles are back in the win column, they’re looking to get back on track. The problem lies however in the fact that the team has hit a wall. Since facing the Houston Texans, the Eagles have not been the dominant team we saw in the first half of the season. Now they have a chance to redeem themselves in primetime with a statement win against a team that is pretty decent.

However, the Green Bay Packers had their fair share of consistent issues this season. Luckily against the Eagles, the run game will probably not be one of those issues. The Packers are struggling defensively against sizable opponents. A win against the Eagles could put them back in the conversation.

Rainy weather will make this game interesting as both teams would benefit by keeping the ball in the arms of their running backs. However, with the lingering issue that the Eagles had with ball security, the team is going to need to be careful should rain happen during the game.

The Philadelphia Eagles currently do not have anyone on the Injury List. A.J. Brown (illness), DeVonta Smith (knee) and Josh Jobe (hamstring) are expected to play on Sunday.

Romeo Doubs (ankle) is out for Sunday’s game.

One of the biggest issues the Eagles had this season was on defense. However, with the signings of Linval Joseph and Ndamukong Suh as well as the consistently great season T.J. Edwards is having, the Eagles could get over the slump they’re having. From now until the rest of the season, the defense is going to have to step up against the run game. Last week versus the Colts, the Eagles defense was able to contain the run and the team is expected to do the same thing again versus the Packers. One of the things that made the Eagles so dominant this season is their turnovers and takeaways. Even though the Packers offense isn’t struggling nearly as much as the defense, Eagles pass rushers are going to need to get at Aaron Rodgers. Darius Slay and Suh expressed interest this week in wanting to do just that.

The Packers are going to need to play to their offensive strength. Aaron Jones was unstoppable versus the Eagles in their last matchup, so the team is going to be inclined to stick to what works for many reasons. Due to the weather and the Eagles defense struggling against the run before Suh and Joseph stepped in, the Packers will also need to run down the clock in order to keep Jalen Hurts and Co. off the field. With the emergence of Packers wide receiver Christian Watson, he might provide some help for the offense and switch up the game and keep the Eagles defense on their toes.

The Eagles are back home since the loss and I think things just line up perfectly for the Eagles to take this win. There’s too much at stake at this point for the Eagles to not win on Sunday night. I predict it’s going to be a big game for the running backs and T.J. Edwards, but I too hope that “Big Play” Slay gets his interception.