The Eagles turned back to defense in their final two picks of the Draft, following up the pick of safety Nathan Gerry with another piece for the defensive line.

The Eagles selected defensive tackle Elijah Qualls of Washington with the 214th overall pick. Qualls is 6'1" and 313 pounds.

Here is a scouting report on Elijah Qualls.

With a big frame, Qualls is strong on the line at various spots, whether in the middle as a tackle or on the end. He is strong against the run and performed well when double-teamed at the line of scrimmage.

His sack numbers won't compare with the Eagles first-round pick Derek Barnett, but he can get to the quarterback effectively and push blockers into the pocket.

Though he has good quickness for his size, he struggles if he can't get the edge with his quickness on experienced linemen. While he has the strength and build to play on the line, his height of 6'1" isn't ideal, as he can get swallowed up in blocking battles if he is overmatched. Given the talent level of Washington's defense as a whole, he wasn't always game-planned against, so the challenge of adjusting will come into play.

That said, this is a strong kid with a lot of potential and upside. Effective on the pass rush and run defense, he has the all-around tools to be a quality player.

Players taken late in the sixth round and seventh round are more or less depth players, so if this is to be taken as a depth move, it's quite the pick. In his NFL.com Player Profile, Qualls had a Round 3-4 projection and was taken in the final picks of the sixth, certainly a high value for the Eagles.

Defensive line help was also not a necessity for the Eagles on Day 3 because of the Barnett pick on Thursday and the addition of Tim Jernigan earlier in the offseason. But adding a quality depth piece there is certainly a strong selection.

You can watch highlights of Elijah Qualls below. 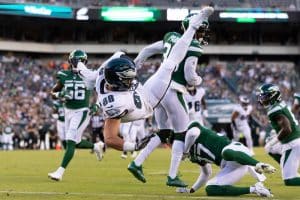