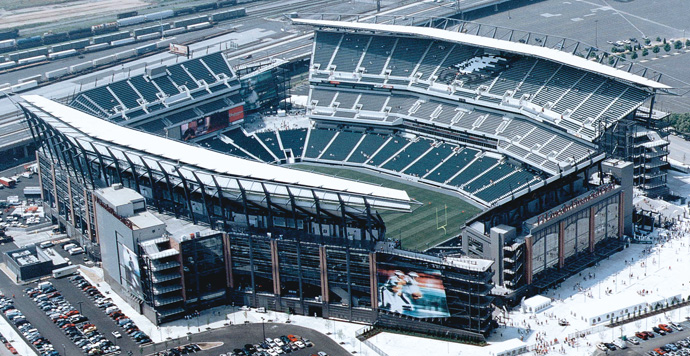 Just over one week ago, the Eagles preseason schedule became official. With a trip to Florida to play against Eagles great Nick Foles on the docket, the 2019 season had already begun to gather hype in Philadelphia.

On Wednesday night, that excitement took another leap forward as the team’s 2019 regular season schedule was released.

The Eagles continue to be a huge draw and add to their recent inclusion in nationally televised games. As Reuben Frank of NBC Sports pointed out, the Eagles are second to only the Cowboys in prime-time games since the start of a new century.

The Birds start their season off at home as the Redskins head to Philly to play them week one.

The Redskins lead the all-time series with the Eagles 86-78-6, but that gap should close a bit in 2019. The Redskins had a great team in 2018, but lacked the depth that the Eagles had when they suffered a similar amount of injuries. The team will be without starting quarterback Alex Smith and backup Colt McCoy is recovering from his own injuries. They brought in Case Keenum to run the offense, but he isn’t likely to take the team to a high level on his own.

Rumors have been swirling that the franchise will trade for Josh Rosen if the Cardinals plan to draft Kyler Murray, but Rosen was terrible last year. He could improve with a better offensive line, but Washington has holes there and most of their line is recovering from injuries. It will be no cakewalk, but the Eagles should be able to sweep the Skins.

Following that, the Eagles will get their first prime-time game when they head to the Atlanta Falcons on Sunday Night Football.

The Falcons are just 14-20-1 against the Eagles and have dropped the last three games. While the Eagles will enter the game with a three-game win streak, all three of those games were played in South Philadelphia. Playing in Atlanta will be a different animal as it is potentially one of the most hostile locations the team will visit in 2019 and the Falcons receiving corps is among the best in the league.

A trip to Detriot is next in line for the Birds.

Despite only winning 17 of their 34 games, the Eagles lead the all-time series over the Lions because the two teams have tied twice, giving the Birds a 17-15-2 record against them. The Eagles hosting the Lions makes the game easier, but there isn’t much to look forward to for Lions fans as the the franchise has yet to find consistent success with Matthew Stafford at the helm.

While the Eagles have won only one of the last four, they have also won seven of the last 10 games between the two franchises.

The Eagles will play on a short week with only three days between games when the Birds play at the Packers on Thursday Night Football.

The Green Bay Packers are a team that have given the Eagles trouble as the good guys have won only 16 of the 44 matches the teams have had. They have also lost five of the last six and Philadelphia fans simply will not be able to take over Lambeau Field. With a healthy Aaron Rodgers, it will be a difficult match-up for the Birds, especially on the road.

The Eagles will play the Jets in the preseason, as they do every year, but will do the same in the regular season, on week five, in Philadelphia.

The two teams have met in the regular season just 10 times since 1973 and the Eagles have won every single time. The Jets have been a bad team for a while, but the additions of Le’Veon Bell and the growth of second-year quarterback Sam Darnold could prove to be an issue for the Eagles defense.

the schedulers did the Birds no favors here with the Jets coming off a bye the week prior.

To start a three-game road trip, the Eagles visit the Vikings in Minnesota.

While the Eagles and Vikings have split the all-time series at 14-14 and the Vikings handed the Eagles a tough loss in 2019, the Eagles have won the two games prior to that. That includes the rout in the NFC Championship game just two seasons ago that kept Philadelphia 4-0 against Minnesota in the playoffs.

The middle of the road trip will be featured on Sunday Night Football when the team heads to Dallas.

The Cowboys lead the all-time series 68-52 and have won three of the last five match-ups. Those games include one where the Eagles rested their starters after locking up the bye the week before, a game where Dallas rested starters after locking up a playoff spot and a game that the referees brutally botched in favor of the Cowboys. Both teams should be competitive in 2019.

The road trip ends in New York when the Eagles take on the Buffalo Bills.

The Eagles and Bills will meet for the 14th time in the history of these two franchises. The Eagles have won seven of the 13 games played already and have gotten the edge in recent years as they have won three of the four meetings since 2003. The Bills dropped off a bit last year and have an aging Shady McCoy as their lead back, but their secondary has a few rising stars that could give Eagles receivers a problem and the Bills have their own franchise quarterback entering his second season in the league.

To start a three-game home stand, the Eagles will host Trey Burton and the Chicago Bears.

A terrible record, the Eagles are just 15-30-1 against the Bears. That said, the Bears got the Eagles into the playoffs in 2018 and the Eagles defeating them gave the franchise a four-game win streak over Chicago. They have Trubisky at quarterback and they hope he can continue to develop and become less streaky. If the Eagles catch him when he is cold, they have an even better shot at winning.

A bit after halfway through the season, the bye week is in a good spot to give the Eagles rest for a mid-season push.

Next, the Eagles will host the New England Patriots for an afternoon game.

With an 8-6 record against the Patriots, the Eagles took the all-time series lead with their upset win in New England in 2015. Their last win against the franchise came in Super Bowl LII. They have lost Gronkowski and Flowers, but they have lost key players in the past and continue to be a dangerous team.

The Patriots are scheduled to have their bye week the week before visiting Philadelphia, who will also be coming off the bye.

Week 12 marks the Eagles’ third and final appearance on Sunday Night Football in 2019 as the Seahawks come to town.

The Eagles are just 7-9 against the Seahawks and have dropped the last four match-ups. Three of those games were in the Seattle dome with the 12th man and the Eagles were forced to play there in both 2016 and 2017 before the fall of the Legion of Boom.

Russell Wilson will keep the Seahawks in the game, but home field advantage with a secondary that is not as skilled should make this an easier game for the team from Philadelphia.

The Eagles will play their first road game in over a month when they visit Miami to play the Dolphins.

The Eagles have won only six of 14 games against the Dolphins since 1970. The Dolphins are arguably the only team in the league without a quarterback plan. While they will almost certainly draft a quarterback, there are no signal callers in the draft expected to be a starter right away. Usually that would mean this game could be considered an easy win, but that isn’t the case.

The Dolphins signed Ryan Fitzpatrick to be their starter, the same man who tore apart the Eagles defense early in 2018. He is a quarterback who gets on really hot streaks at times, but is certainly beatable. The Eagles will hope he is cold when they meet him this season.

The Eagles play the NFC East rival Giants for the first time in week 14, far later than is usual for division opponents. This will be a home game played on Monday Night Football.

The Giants and Eagles are tied at 86-86-2 all time with a 2-2 split in postseason games, but recently the series has been in the Birds’ favor. The Eagles have won the last five games and nine of the last 10 against New York. Things seem unlikely to improve for Big Blue after an offseason where the team seemed to begin a rebuild and then try to build a competitive roster by throwing huge money at Golden Tate and Sterling Shepard. The Giants may be the worst team Philadelphia plays in 2019.

In between three other divisional games, the Eagles will head to Washington D.C. to take on the Redskins at the end of the season.

The Birds will be on a short week again for this match-up given that they play Monday night the week before.

A Sunday afternoon game, the Cowboys will travel to Philly for their second-to-last game.

The Cowboys are probably the roughest of their four final games, so it is a benefit to get home-field advantage for that game.

The Birds will close their regular season in New York for their second game of the season against the Giants and their fourth game against a team from New York (or New Jersey).

With two teams coming off byes right before their match-up with Philly and only three days of rest heading to Lambeau Field, the Eagles schedule will be rougher than anticipated when the opponents were first announced, but it is a rather balanced schedule with some of the easiest match-ups likely to come in the final four weeks of the season when standings really matter.