Former Phillies Pitcher: IronPigs' Grullon ‘So Much Better’ Than Knapp 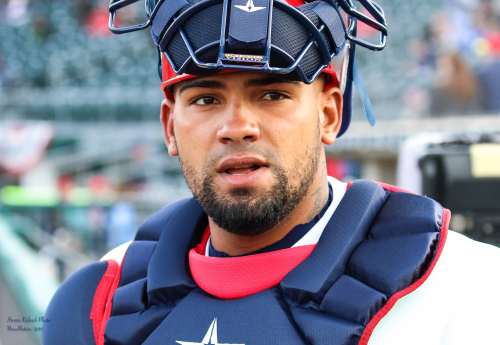 The Philadelphia Phillies have the National League's second-best record for a reason — in part thanks to their high walk rate and surprisingly effective bullpen, albeit a slew of injuries.

While the club will remain active now until the July 31 trade deadline to try to bolster the club's roster for the second-half and subsequent postseason run, it does not need to look far if a desire arises to replace backup catcher, Andrew Knapp.

Knapp, 27, is in his third season with the Phillies; among the 60 MLB catchers with at least 50 plate appearances this season, the switch-hitter entered Thursday with a seventh-worst batting average (.163), albeit posting the second-best walk percentage (21.8) — trailing only the Arizona Diamondbacks' Alex Avila (26.4).

While Knapp may walk, he simply does not have the power that 23-year-old catching prospect Deivy Grullon is producing at Triple-A Lehigh Valley. On Thursday, former IronPigs and Phillies right-handed reliever Michael Schwimer took to Twitter to acknowledge that sentiment.

Schwimer tweeted Thursday evening, "Complete joke he wasn’t rule 5ed. Phillies got so lucky by not protecting. He is so much better than Knapp it’s scary."

Complete joke he wasn’t rule 5ed. Phillies got so lucky by not protecting. He is so much better than Knapp it’s scary. https://t.co/40ETwX8pWQ

The now-retired reliever's reference to "protection" and "rule 5ed" is in regard to the Rule 5 draft. Each offseason, clubs can avoid losing Rule 5-eligible prospects to other teams in the annual December draft by selecting their contracts and adding them to the their 40-man roster.

The Phillies protected three prospects in November — shortstop Arquímedes Gamboa, and right-handers Édgar García and Adonis Medina — have been guaranteed to remain within the club's farm system for at least the 2019 season. Garcia has since made his MLB debut this sesason. As it turned out, the club was among only five teams to not lose a player, although it has in years past.

Andrew Romine and Deivy Grullon continue to be two of the hottest hitters in the IL. pic.twitter.com/pbj7UzSgzl

Luckily, as Schwimer said, the Phillies did not lose Grullon, in particular. Entering Thursday, the Bonao, Dominican Republic, native slashed .342/.392/.587 in 41 games with the IronPigs, leading all Triple-A catchers in batting average (.342) and RBI (38).

As Schwimer put, Grullon may "scarily" be better than Knapp, yet whether the Phillies are willing to part with the latter in favor of the former any time soon remains to be seen.

And Reading Catcher Austin Bossart is a better receiver than them both.