Eagles Make Trades, Acquire Goodwin and Speed Among Flurry of Moves on Day Three of Draft

The Eagles decided to address their most glaring need in round one, taking speedy receiver Jalen Reagor out of TCU.

It was a decision that many fans took issue with, perhaps unjustifiably so.

On day two, the Eagles decided to ignore a glut of starting talent on the board to take a back-up QB, justifiably enraging fans, and a linebacker with less football experience than anyone other than Jordan Mailata.

The Birds are in danger of leaving this draft with one player who could make an impact in year one or possibly throughout their careers, making the later rounds critical.

Howie Roseman was not on the hot seat, but you have to think that he is now after using pick 53 on a quarterback with no explanation as to why.

The Eagles had five picks in rounds four, five and six and need them to be immediate breakout stars if Howie Roseman wants to keep his job.

With the first of those picks, the Eagles selected a player that could come in and immediately serve as the third safety on the roster. 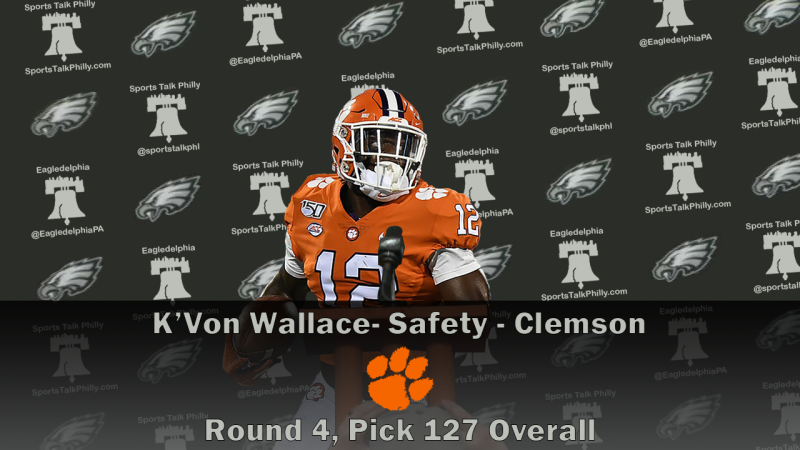 Wallace plays well as a box safety and a potential linebacker hybird with athleticism, drive and awareness.

He is a solid pick, but may never develop into a starter at the position. The upside is there, however, along with a pretty high floor.

At Clemson, Wallace totaled 156 tackles, two sacks, five interception, two forced fumbles and 15 defensed passes over his four year career. Of note is that his stats, especially interceptions and defensed passes, have risen greatly with a full time position over the past two season.

Wallace represents another high character addition as the first in his family to graduate from college, having completed his degree at Clemson.

The pick creates a crowded safety room with Wallace joining Rodney McLeod, Jalen Mills and Will Parks along with Rudy Ford and Marcus Epps.

With their second pick in the fourth round, the team took former Auburn offensive tackle Jack Driscoll. 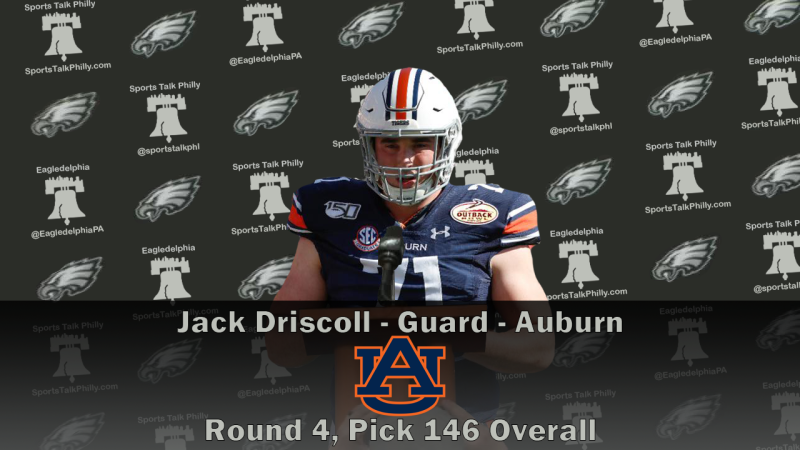 The team announced him as a guard, however, showing their plan to make him more versatile on the line.

The Eagles need to replace Vaitai and it would be best if they could develop Driscoll as they did with Seumalo so that he can provide a back-up at all positions on the line.

He started one and a half seasons at tackle for Massachusetts before transferring to Auburn to start at right tackle there.

Graduating with two degrees, Driscoll is an extremely intelligent player whose flaws are mechanical and his size. The Eagles have undersized Jason Kelce, who is the best center in the league, to teach Driscoll how to cope with the size disadvantage and if anyone can teach him better mechanics, it’s Jeff Stoutland.

The Eagles traded their next pick, pick 146, to the Cowboys for pick 164 and a 2021 fifth-round pick, essentially taking two fifth-round picks from a divison rival for the final pick in round four.

By the time pick 164 came around, cornerback Bryce Hall, center Nick Harris and receiver Tyler Johnson were already off the board and the Eagles traded back again for 173 and 227.

At 168, the Eagles added not a complimentary reciever, but one with the same skill set as Jalen Reagor, DeSean Jackson and Marquise Goodwin (more on that below). 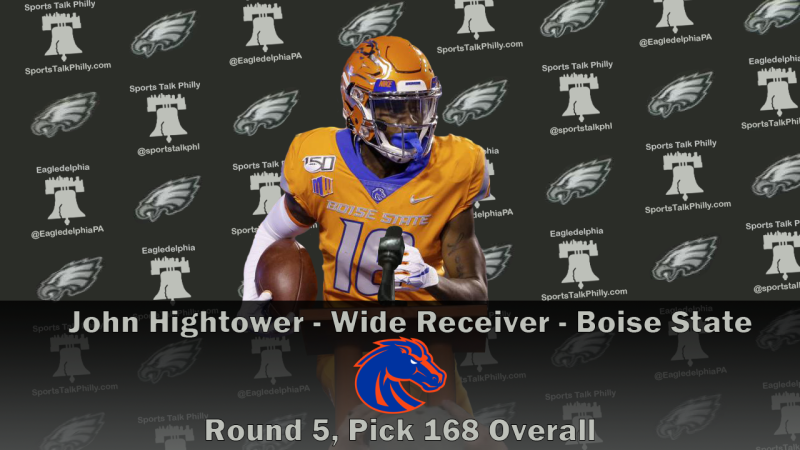 Hightower is a speed receiver with just two seasons played at Boise and a total of 1,447 yards and 14 touchdowns. He added another 840 yards on returns.

Hightower really hasn’t shown much else other than speed, so he is a major gamble, especially having not played power five teams consistently. If he can’t win with speed, he doesn’t have much contribution to the team, so he may be best used as a gadget player or returner to start his career while he learns to be more physical and expands his route tree.

Then the Eagles didn’t pick at 173, trading with the Bears for more picks.

With the first of their three picks in the sixth round, the Eagles added south NJ native Shaun Bradley to the squad. 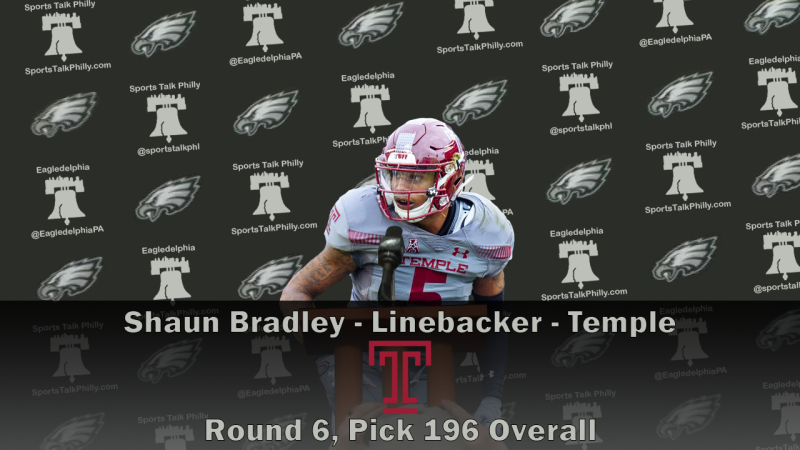 Bradley will likely need to be a special teams ace to make the roster.

The Temple product received a single-digit jersey for the final two seasons of his career.

He has the speed and strength to succeed, but his inability to get off of blocks and his slow play recognition are what dropped him to the sixth round. If he doesn’t improve there, he may well find himself without a spot on an NFL roster.

Four picks later, the Birds picked up yet another receiver who can run fast. 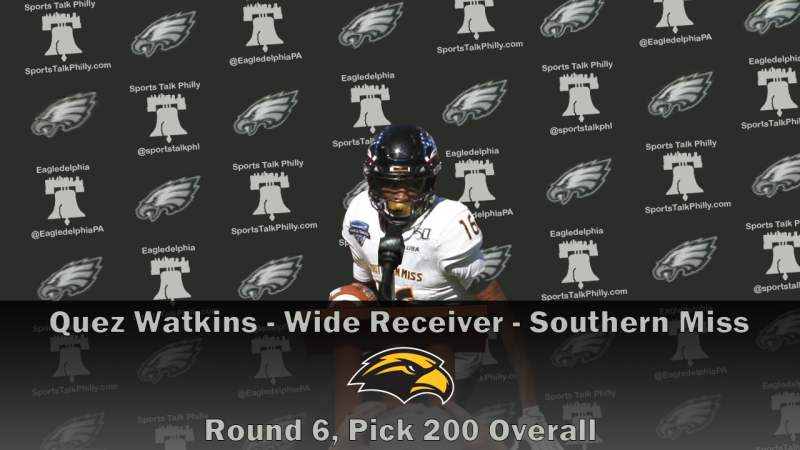 Watkins was suspended from college eligibility for poor grades, which were eventually raised to a qualifying level again, and lacks a significant route tree while also getting routinely out muscled by his competition.

He is a player who could make huge plays when he was wide-open or much faster than everyone in college, but will struggle to produce in the NFL unless he improves his abilities in route-running and learns to be a more physical player.

The fastest receiver in the draft, the Eagles will hope that they can make a receiver out of a player that can run fast.

At 210, the Eagles took another developmental offensive lineman. 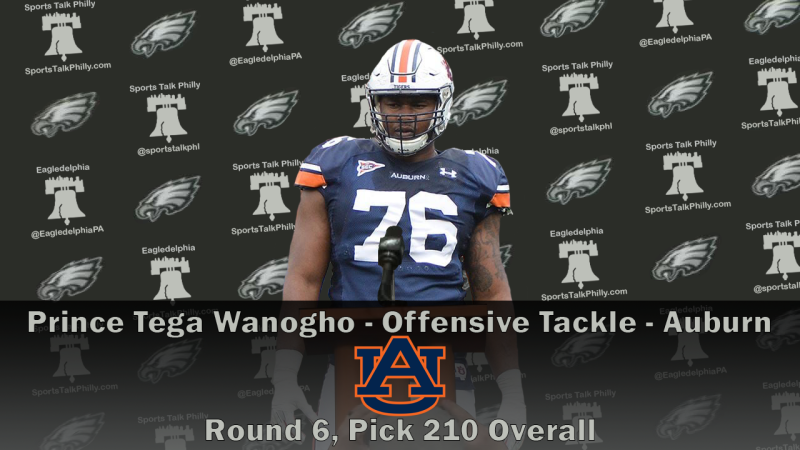 Prince Tega Wanogho was born in Nigeria and is actually a prince.

Sent to America for a better life, Wanogho was planning to play basketball, but a broken leg in 2015 caused him to stop playing.

He has the size, mindset and athleticism to succeed, but only started playing football in 2014 and OL in 2016.

He could become a starter, but doesn’t have the experience or fundamentals yet to do that. The Eagles will likely look to develop him as a swing tackle.

He has better tools than Big V did and more experience than Mailata. Perhaps the combination will lead to an even better tackle.

With their final pick, the Eagles took a third linebacker, this time from Stanford. 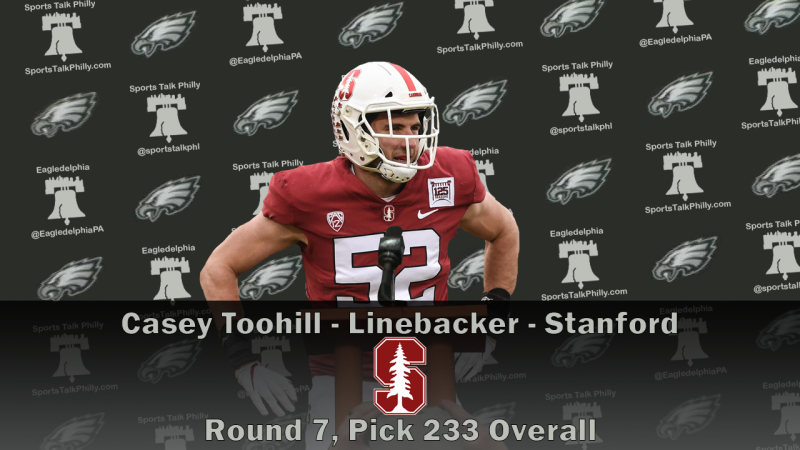 In four seasons at Stanford Toohill registered 124 and 14 sacks.

Toohill struggled with injuries, however, starting just his Senior season where he managed eight of those sacks and 57 of those tackles.

He fits what the Eagles were looking for with a 4.62 40 time and a high motor, but he will not be a starter in 2019. While his sacks are evidence of his strong ability to rush the passer and attack in the backfield, he struggles to move horizontally or to get off blocks. He would also be a liability and coverage and has struggled with missed tackles.

Toohill projects more as a developmental player that, if he shows improvement, the Eagles are likely to place on their practice squad in the hopes he can crack the roster in the next season or two.

The Eagles also acquired a veteran in the draft.

In a swap of picks, the Eagles also added Marquise Goodwin.

Goodwin is a name fans will recognize and may energize them, but there is a reason he can over for a swap of picks.

He made a name for himself by running a 4.27 at his combine, but has been unproductive in seven NFL seasons.

Career totals for Goodwin are 2,323 yards and 13 touchdowns. His average season has been about 11 games per season with 332 yards and two touchdowns.

That laundry list of injuries is not ideal for a team whose major issue over the past two seasons has been injuries, including among receivers.

He is under contract for the next two seasons. He carries a cap hit over $4 million in 2020. The Eagles should be able to release him with just over $1 million in dead cap – an important note considering the team now has Jackson, Reagor, Hightower and Watkins with the same skill sets and Goodwin has the least resources put into him by the organization.