Eagles Flyers Phillies Sixers About Us Write For Us
Week 10 Recap: It's Been 612 Days...
Phillies Cut Ties With Hale, Call Upon Veteran Feliz

Rejoice! Kelly Green Can Return...But When? 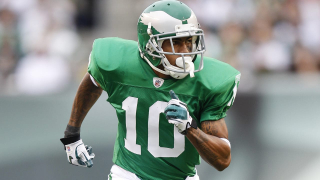 Uni geeks such as I rejoiced when it was announced that the NFL would eliminate the “one shell” rule allowing for the return of alternate helmets and throwback uniforms.  Images of Bucco Bruce, Pat the Patriot, and the beloved Kelly green Eagles set danced through my mind like a kid thinking of what Santa is bringing to the house on Christmas morning. But unbridled joy was quickly squashed like a finding out your parents were really Santa.

According to Pro Football Talk, NFL teams can use an alternate helmet now that the “one shell” rule has been changed however the “notice date” for teams to make uniform changes for the 2022 season has passed.  Teams will be allowed to wear an alternate helmet color, but they won’t be able to have a complete new set of uniforms for the season.

Major bummer. So, what does this mean for the Eagles?

Unless there’s NFL changes policy, which the league could be pressured into, the Kelly green uniforms won’t make a return until 2023 at the earliest.  The Eagles could use a Kelly green helmet with their current uniform set but that’s not likely considering they haven’t done it yet.  In the short-term there’s a possibility that the Eagles could wear another helmet in colors that match with the current midnight green-silver-black-white motif.  A black, white, or silver helmet could be in play for the Birds over the next two-season unless the NFL relaxes the uniform rule.

We will just have to continue to wait for the return of Kelly green.

I have been an eagles fan in Milwaukee for over 45 years. It is about time they switch back to kelly green uniforms because, the midnight green uniforms are boring and seem to make the players look like they are playing slow. However, when they do go back to kelly green, they can keep the old wings of the 90s helmets, but make sure they sharpen and shorten them up boldly. Also, make sure they do the same to the silver color pants as well. This is a chance to do something great for the players, organization, and more importantly, the fans who purchase their merchandise that support their team worldwide. So please, don't screw this one up. I can't wait to start wearing the eagles kelly green gear again. Thanks,