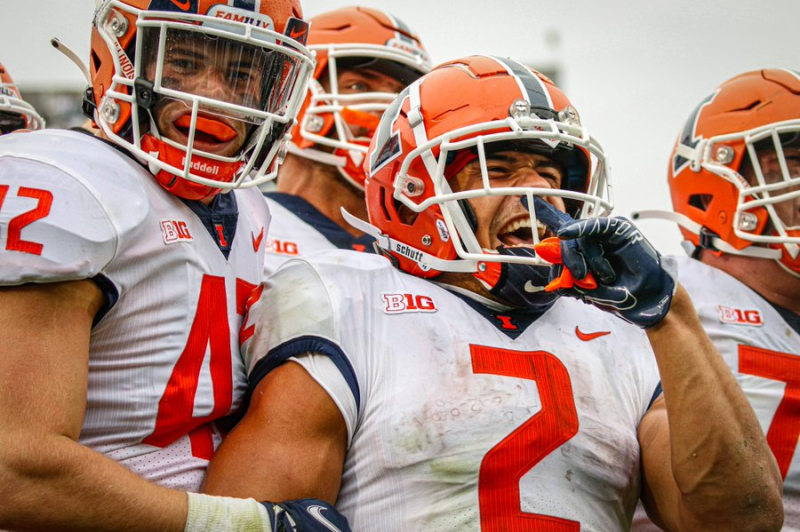 Illinois, a 24-point underdog, used a classic Big Ten ground and pound style to upset No. 7 Penn State in a nine-overtime slog on homecoming in Happy Valley.  The Illini’s two back combo of Chase Brown and Joshua McCray rushed for 365-yards and a touchdown in the upset.   The winning play came in the bottom of the ninth overtime period, Brandon Peters, who replaced the injured Art Sitkowski in the previous period, connected with wide receiver Casey Washington to seal the Illini victory.  The loss ends Penn State’s college football playoff hopes and most likely eliminates them from Big Ten championship contention.

Sean Clifford, who was injured in the Iowa loss, played the whole game for the Nittany Lions however it was evident early on that he was not 100% healthy.  Penn State offensive coordinator Mike Yurich’s play calls were run heavy and see little movement from the otherwise mobile quarterback. There was a glimmer of hope for the Penn State passing game when Clifford connected with KeAndre Lambert-Smith for a 42-yard touchdown in the first quarter.

The Nittany Lions were never able to duplicate that success through the air and were held to measly 62-yards on 29 rushing attempts.  It’s worth asking whether the offensive would’ve been run more effectively by Ta’Quan Roberson or Christian Veilleux who split reps this week in practice.

A week after being called out by head coach Bret Bielema, the Illini offensive line came out and handled the more seasoned Penn State defensive line.  Penn State’s depth, which was pointed out as a major plus in the preview, was never a factor in the game. Penn State had no answer for the run heavy Illini attack.

On paper this game should not have been close but that’s the beauty of football, the game isn’t played on paper.  Perhaps Penn State was looking past the Illini and focusing on their marquee matchup against Ohio State. Maybe the Illini came into this game knowing it was their “bowl” game.  Whatever the reasons, Illinois was the team that had the chip on their shoulder and the desire to win.