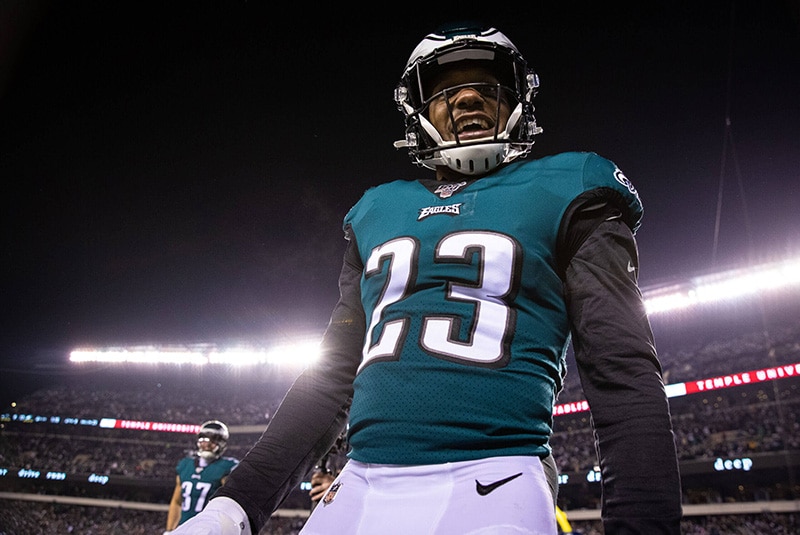 Though he’s no longer representing the midnight green, former Eagles safety, Rodney McLeod, and his wife Erika’s heart, and foundation, belong to the city of brotherly love.

Their foundation, Change Our Future, is staying in Philadelphia after starting up during the pandemic to continue serving its mission of bringing youth empowerment, health and wellness, community empowerment and education and career resources to its youth. The McLeods are also working to expand Change Our Future to other cities, especially with Rodney playing for the Colts next season, but for the most part, the foundation has held ground in Philadelphia.

“I think it’s important for us to keep Change Our Future existing here in Philly as well as some of the other programs that we’ll touch on, but we felt as though being here for six years, Philadelphia became home for us,” Rodney said.

Besides keeping the foundation in Philadelphia, they also hosted their first “I Am” Youth Leadership Summit at the Community College of Philadelphia on Tuesday, June 28. This all-day event allowed rising tenth and eleventh-grade students to learn what it means to be a leader and their true selves.

The event featured numerous workshops such as leadership definition, self-confidence building and perfecting your pitch. The workshops led to a networking event for the students to engage and connect with each other using the skills they learned during the day.

“I just think that it’s very important that we need to connect the dots in terms of saying something and putting it into action and I think that the leadership summit, they’re gonna learn how to stand out amongst their peers and work alongside different peers in their community may be that they have not come across paths yet,” Erika said.

The leadership summit being held at the Community College of Philadelphia gave the students the perfect opportunity to explore potential college life.

“These opportunities to literally touchdown on a college campus and start taking classes to help elevate [the students] academic resumes. So, we use the youth leadership summit we’re going to pair it alongside the other programs that we’re going to be starting.” Erika said.

One of the programs the McLeods will be kicking off in the fall is Rodney’s mentorship program called, “Next Man Up.” This program will help eliminate the systemic gaps that have existed in the Black community, specifically with African men.

“Having a male role model in front of them that looks just like them to be able to address various subjects from financial literacy to human behavior to life choices to entrepreneurship and philanthropy. We’re building this well-rounded gentleman,” Rodney said.

The students participating in the “Next Man Up” program will also reap the benefits for their well-being. Since June is Men’s Health Awareness Month, Rodney also shared advice about reaching out for physical or mental help.

“I think it’s huge that we recognize us as men and everybody to tap in and be more health-conscious when it comes to your overall wellbeing, mentally and physically,” Rodney said. “As men, we’re very dominant creatures and alphas. Often, it’s hard for us to come out and express how we truly feel. I’m working on that to be more expressive myself,”

Some of the tools that Rodney uses for overall well-being include taking time to unwind and not being afraid to reach out for help.

“Finding time for self and being able to sit and unwind in silence and just reflect with so much going on, I think that’s just important,” he said.

Adding onto the fact that he is also an athlete, Rodney shared that people should be more considerate of differentiating “the athlete” from “the person.” One of the tips he likes to share with other athletes is to explore other passions and interests besides playing football.

“Often we are identified based on what we do by our jersey number or classified as these warriors and understanding that at the end of the day we are humans. We bleed the same way that everybody else does,” Rodney said. “We have our own concerns, problems and issues just like the next and so I think it’s important for people to respect that as well.”

With the second annual Sneaker Ball around the corner, the McLeods expressed their appreciation for how much they were able to raise last year, but also how they’d love to have more like-minded people supporting the Change Our Future mission.

“I think for us we are very humbled by what we were able to receive last year from so many gracious people of the Philadelphia community and it speaks to the hearts and minds of so many out here who are passionate about the same things that Erika and I are standing up for and addressing,” Rodney said.

“We’re a family at Change Our Future, we want to encourage more people to get involved to find their passions through maybe one of the programs that we’re offering,” Erika said.

To get involved, visit the Change Our Future website. From there, the McLeods talked about how people can donate financially, but also how people can get involved in the many programs they will be starting up in the fall and into 2023.

The Change Our Future duo will host their second annual Sneaker Ball on July 7, 2022, from 7-10 p.m. at the Vie in Philadelphia. Tickets can be purchased on the foundation website.