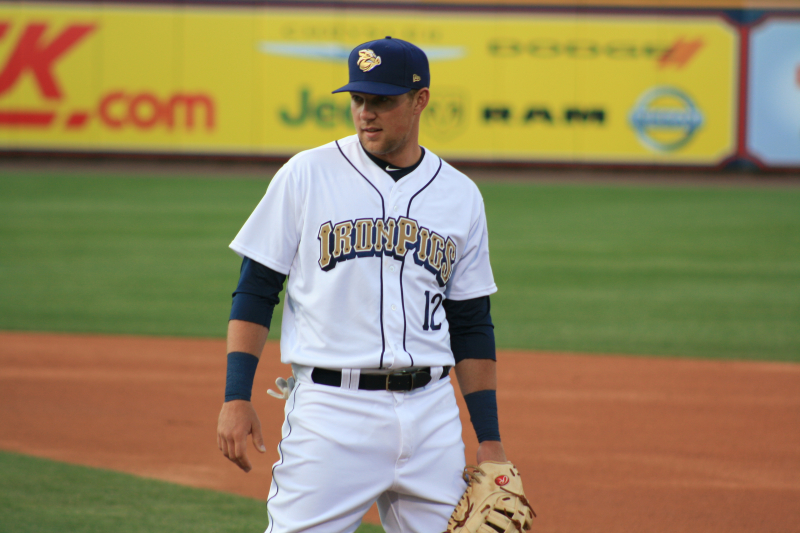 We are back once again with the 97.3 ESPN Phillies mailbag.  The mailbag is full of trade deadline questions as we are less than a week away from the July 31 deadline.  Send your questions anytime to @FrankKlose on Twitter and we will answer them on the Sports Bash with Mike Gill each Tuesday at 2:30.

Do you think the Phillies will find someone to take Tommy Joseph so Rhys Hoskins can come up?
~Mike

At the beginning of July, it seemed that first baseman Rhys Hoskins was banging down the door to come up to the Major Leagues.  However, Hoskins has cooled off a little bit.  In 20 July games, Hoskins is batting just .203, though his four home runs are mostly on pace with other months.  The slow July could show that there is no need to rush Hoskins.

Unfortunately, Tommy Joseph has struggled too, to a certain extent.  Joseph is batting a just-ok .250 in July after batting .243 in June.  After being the one productive bat in June, Joseph has slipped all the way to sixth in the lineup last night.  One major reason for the low batting average is Joseph's production against left-handed pitchers.   Once Joseph's bread and butter, he has struggled lately and now is actually batting worse against left-handed pitching than right-handed pitching.

There is nothing about Joseph that is overwhelming for any team to acquire him.  At the same time, it's hard to say he has no value whatsoever.  My guess is that the Phillies simply will not release Joseph, but that they would trade him for a low return.  If Hoskins is struggling at the plate, the sense of urgency to bring him up is minimal.

The Phillies do not have an open 40-man roster spot just yet, which Hoskins would need to be added to the 25-man roster.  So, the Phillies must also consider which prospect they would have to cut in order to find room for Hoskins.  If Joseph were to be subtracted, then yes, there would be room.  But without a clear taker for Joseph's services, there may not be that space.

What other moves the Phillies make could determine when Hoskins arrives.  If they have a full roster in September, we might have to wait until Spring, when the Phillies can bring an experienced bat to Spring Training on a minor league deal and let Hoskins and that player battle it out.  As we saw last year with J.P. Crawford, there is no need to promote a player that they do not need to add to the roster just yet.

Now that Jaime Garcia and Trevor Cahill have been traded, is there a landing spot left for Jeremy Hellickson or did the Phillies miss their chance?
~Mike

Last night saw two starting pitchers moved: Atlanta Braves right-handed starter Jaime Garcia to the Twins, and San Diego Padres right-handed starter Trevor Cahill to the Kansas City Royals.  While both names frequently have come up in trade rumors alongside Phillies starter Jeremy Hellickson, there are not too many options available right now for starting pitchers.  That means, I think Hellickson is a good bet to be moved.

First, for all I read about people mentioning Hellickson's salary, forget about that being an obstacle.  The Phillies overpaid to have a veteran arm in the rotation that was only going to require a one-year commitment.  Even though Hellickson is owed over $8 million the rest of the way, it is well within the club's means to pay it.  The acquiring team can have the Phillies mostly pick up the tab.

Second, just last night alone we saw two big name starting pitchers leave the game with injuries: Los Angeles Dodgers ace Clayton Kershaw and Washington Nationals starter Stephen Strasburg.    So, two players have been taken off the trade board and all of a sudden there is a need for two more pitchers out there in the starting pitcher market.  MLB.com's Jon Paul Morosi writes that the Nationals will pursue a starter, and the Dodgers may need a stopgap until Kershaw returns.

Bigger names such as Texas Rangers pitcher Yu Darvish and Detroit Tigers ace Justin Verlander might move in trades, as well as Sonny Gray of the Oakland Athletics, but Hellickson is a reasonably-priced fallback.  In fact, the Rangers are kind of on the fence about whether or not they should attempt to hang in the race.   The Tigers seem eager to shed money and to start a rebuild, but Verlander's money might scare teams away.

So, it seems reasonable that Hellickson could be moved and the Phillies can turn a rotation spot over to Ben Lively, which would be value to the club in itself.

What are the Phillies going to get in return for Pat Neshek?
~Barry

For a player that the Phillies got in exchange for cash considerations, Neshek is sure a hot commodity.   At least five teams are interested in having Neshek in their bullpen, and a trade is so certain that Vegas has even set odds as to where Neshek will land.   As a few teams have climbed into contention there may even be more that are in the mix.  That means Neshek could command a pretty penny.

Neshek was rated by MLB Trade Rumors as the third most valuable trade commodity on the trade market.  Given the value that other relievers have netted, Tim Jackson of the Tim Street Journal predicts that the Phillies get a Top 50 prospect in baseball:

And what did Kahnle help fetch for the White Sox? Blake Rutherford, the fourth-best Yankees prospect and 49th-best in baseball, according to Baseball Prospectus.

It’s not just about Kahnle, who was a part of a larger deal, though. Look at last year. Cleveland traded Clint Frazier to the Yankees for Andrew Miller. At the time, BP felt Frazier was the 26th best prospect in baseball. He’s already making an impact in the Yankee outfield.

A week before moving Miller, the Yankees traded Aroldis Chapman to the Cubs for Gleyber Torres. Torres was ranked by BP as the 36th best prospect in baseball. The Chapman trade is particularly relevant to Neshek’s case because Chapman, too, was slated for free agency after the season.

We have seen the last few outs become more and more valuable in baseball, and the Phillies are in a prime place to cash in.

The Phillies have six of MLB Pipeline's newly-updated top 100 prospect list (more on that later), so adding another one would certainly keep the Phillies well-ahead of the curve.  Thanks to their many deals, the White Sox are tops on the list, but the Phillies are not far behind.  Expect the Phillies to add this the list with the Neshak trade.

Assuming we can't trade Tommy Joseph, there is no reason not to send Brock Stassi down, move Tommy Joseph into his role as pinch hitter, and promote Hoskins to play first base.

We're not contenders in 2017. Does it really matter if our 25th man on the bench bats right handed? Is it worth letting Hoskins spinning his wheels at age 25 in AAA because Joseph is just mediocre enough to not be released?

Fair point - but Stassi was already sent down. Having two right-handed first basemen do not really work on the same roster. Hoskins is 24 and will not be 25 until Spring. I do not think waiting will be too bad.