Catastrophe and Death at the Ball Park

Modern major league facilities are state of the art in every sense of the word – fan experience, great visibility from nearly every seat, picturesque backdrops, unique city specific architecture, and safety. Citizens Bank Park offers patrons multiple things to look at and buy when the Phillies are losing by double digits. But early ballparks offered little if any of the above amenities, and none of the safety elements. There were't any "beware of flying objects" signs posted, and in the case of the Phillies' first home Philadelphia Base Ball Park (later Baker Bowl), the stadium itself proved to be the greatest threat to patron safety on more than one occasion.

Built by Phillies president Al Reach in 1887 on a former sub-street level dump, the ballpark was snuggled into north Philadelphia, bounded by Broad Street, Lehigh Avenue, 15th Street, and Huntingdon Avenue. Like all other ballparks of the era, Philadelphia Base Ball Park was constructed of wood from local lumberyards. Somewhat problematic was the Reading Railroad's tracks next door. According to Philadelphia baseball historical Rich Westcott, "locomotives would billow smoke or spray sparks on the grandstands, occasionally starting small fires on the wooden floors or seats." Naturally, this posed a possible threat to Mr. Reach's sizable investment in what was at that point a lackluster franchise mired in the second division. 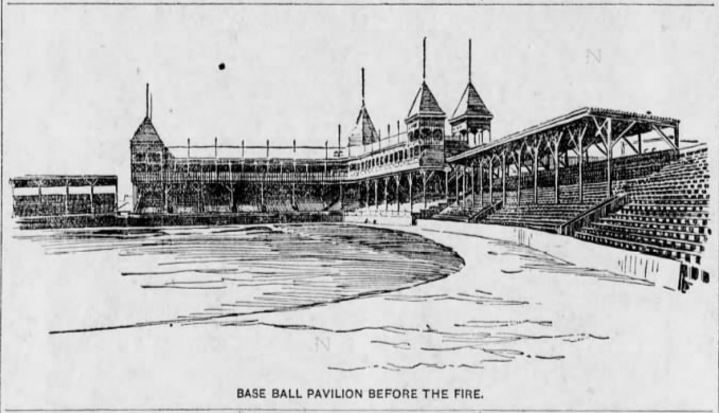 Catastrophe first struck on on August 6, 1894 as the Phillies prepared for a game with the Baltimore Orioles. The Sporting Life exclaimed that the "finest pavilion in the entire country [was] completely destroyed." Period newspapers reported that players Jack Fanning and Jack Taylor noticed a blue smoke and a small flame rising from one of the main grandstand turrets. They tried to extinguish the fire but were unsuccessful, sending the Phillies scrambling into the clubhouse to gather their belongings before the fire engulfed the entire park, and escaped as "blazing timbers were already falling about them." Sporting Life detailed that some players were unable to bring all of their wears with them. "Hallman mourns the loss of nearly all his clothes, Turner and Grady each lost his uniform, and Sullivan had a suit of clothes, a gold watch and about $40 to go up in the flames….Charlie Reilly tarried so long that the flames consumed his coat from his back."

The Sporting Life postulated that the fire originated in "the women's retiring room" from "inflammables left by some plumbers." It was the third fire to consume and destroy a ballpark that year, and the second in that particular week! The Chicago grounds were consumed by flames when a dropped lit cigar was blamed for the blaze. The Philadelphia fire burned the park to the ground and also consumed the neighboring 350-stable (horses) Omnibus Company, the 13th and 15th streets car depot, the 12th and 16th streets divisions of the Philadelphia traction company, along with other businesses and damaged a few private homes. Reported damages for the ballpark alone were $70,000 (approximately $4 million in today's money).

Laborers worked in three shifts, 24 hours per day, to erect temporary grandstands for the remainder of the 1894 campaign. Reach explained in an 1895 letter that the new structure will be constructed mainly of brick and steel.

Rebuilt as one of the finest ballparks in the land, the arena soon again witnessed tragedy. On August 8, 1903 the Phillies hosted the Braves in a doubleheader at the Huntington Avenue Grounds. In the second game approximately 300 people gathered along the grandstand walkway to witness an altercation between a drunk man and two women. Allegedly the women teased the man for his present physical condition, he spooked them, and they cried for help. But the walkway was rotted and collapsed under the great weight of the crowd, dropping people 30 feet to the ground. Naturally this commotion drew more people and an estimated 200 more spectators fell on top of those who fell initially with the walkway. The game was subsequently cancelled.

The catastrophe killed seven people, five more later died of injuries sustained from the collapse, and another 230 people were injured. It remains the greatest tragedy in baseball history. According to National Pastime Museum writer Bill Felber, 80 lawsuits were filed, totaling $1 million in damages ($26 million today).  The Sporting Life reported that several parties were named responsible for the disaster, including Philadelphia, the Department of Public Safety, Phillies president James Potter, and former owners and then-current stadium owners Al Reach and John Rogers. One particular lawsuit filed against Reach and Rogers reached the Pennsylvania Supreme Court (six years later in 1909) which affirmed a lower court decision that neither Reach nor Rogers could be held responsible for the faulty grandstand timbers, and blame lay with the stadium lessee, James Potter.

Moving ahead to when the Phillies were contenders, a short anecdote. Robert Winners, a 65 years old native Philadelphian, attended the Phillies-New York Giants contest on July 5, 1915. The Philadelphia Inquirer detailed that during the second inning, "Winners [stood] in the bleachers and had been watching the progress of the game with great interest." The Phillies pushed two runs across the plate in the second inning, and Mr. Winners "enthusiastically cheered" the entire time but felt ill, asked a neighbor for help, drank a glass of lemonade, then dropped dead on the spot. Who knew that a winning Phillies team would kill more people than an exceedingly bad one? (The two runs in the second were the only runs scored in the entire contest; the game lasted a brisk 1 hour and 12 minutes.)

Baker Bowl had been burned to the ground, rebuilt, fallen into disrepair, and repaired several times by the time the final tragedy struck on May 15, 1927. Rain began to fall during the Phillies-Cardinals contest, causing patrons to seek cover under the right field pavilion. The Philadelphia Inquirer explained that the stands began to creak and crackle under the excess weight when suddenly part of the lower right field pavilion finally collapsed, killing one man, 58 year old Fred Haas, and injuring 50 more. "The crowd of hundreds of men and women rose to its feet en masse, screaming with terror, fighting like demons, trampling each other under foot in their anxiety to escape." The majority of injuries were sustained from the trampling.

Philadelphia Base Ball Park was once a picturesque, state-of-the-art facility and the jewel of America's ballparks when it first opened in 1887 but was quickly degraded to a mediocre park after the 1894 fire. The rebuilt brick facility looked more like Eastern State Penitentiary than a baseball stadium and was soon considered too small and obsolete. By the time the Phillies vacated the property midway through the 1938 season, Baker Bowl was a serious eyesore and beyond repair or rehabilitation. The park bore witness to some of the worst major league baseball ever played in Philadelphia. Despite all of this, it's colorful, tragic past is an interesting historical footnote.